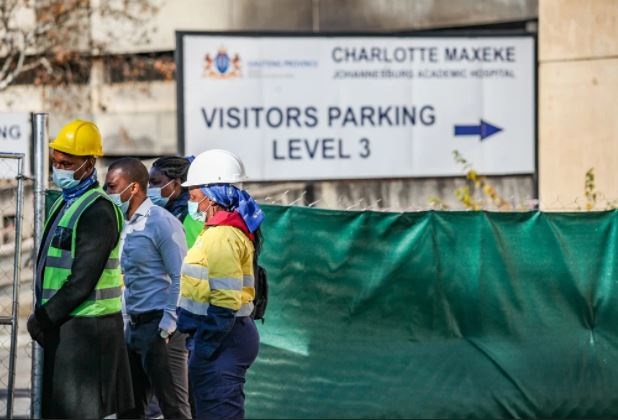 The fire, which broke out at Charlotte Maxeke Hospital on Tuesday night, was the fourth fire to hit hospitals in Gauteng this year.

The fire started in the parking lot and was eventually extinguished.

There was, however, no need for patients to be evacuated.

According to the Gauteng health department's Motalatale Modiba, the fire started in one of the areas affected by the April 2021 fire at the same hospital.

In response to the recent fire, the DA's Jack Bloom demanded a thorough investigation.

"It is unbelievable that another fire could start at this hospital, which spends R40 million a year on security. A full investigation is needed and sabotage should definitely be suspected," he said.

"There was a fire at a temporary structures at the Steve Biko Hospital on 30 May this year and there was a blaze in a linen closet in a medical ward there on 12 June.

"Two weeks ago, a fire occurred at the Chris Hani Baragwanath Hospital, near the Covid-19 tents, and it spread to the laundry site before being put out," he said.

Also, on the morning of Friday, 16 April 2021, a fire broke out at Charlotte Maxeke. It destroyed medical supplies, including syringes, masks and personal protective equipment (PPE), estimated to be worth R40 million. Part of Charlotte Maxeke Hospital which was damaged in a fire.
Twitter/ Gauteng Health

News24 reported, at the time, that the blaze had caused damage to parts of the hospital, with more than 840 patients evacuated.

Bloom said a report on that devastating fire had still not been received.

He said: "Many staff members think this was deliberately done to cover up evidence of corruption."

In the last seven years, Bloom said there had been nine fires at Gauteng hospitals, in addition to the unexplained fire at the Gauteng health department's head office, which burnt down the Bank of Lisbon building and killed three firefighters.

He said the absence of fire investigation reports looked more and more like a cover-up, which was why the DA would continue to press for it to be made public.

We need answers from the Gauteng health department as to why there are so many fires and what is being done to prevent it.

South African hospitals have been plagued by fires for the past year.

In May this year, staff and patients were evacuated from two wards and the emergency unit of the Vredendal Hospital in the Western Cape after a fire broke out.

In September 2021, Christiana Hospital, in the North West, was gutted by fire. A forensic investigation by the province's health department revealed that human error had caused the fire. In May, the same year, two patients - one of whom was a convict serving a life sentence for rape - died when a fire broke out in one of the cubicles of the Covid-19 ward of the FH Odendaal Hospital in Modimolle, Limpopo.

Earlier in February, over R23 million worth of PPE was destroyed when a fire ravaged the storeroom of Carletonville Hospital.

Speaking to News24 last year, after the fire at Christiana Hospital, Health MEC Madoda Sambatha said rebuilding the hospital was expected to be completed at the end of 2022.

Sambatha said that, in the meantime, they were building a temporary structure, which would include a 24-hour emergency department, with a three-bed capacity, and an out-patient facility, with a four-bed capacity.

It would also have a three-bed obstetric care unit, with an additional four beds for postnatal and antenatal care.

On Wednesday, however, spokesperson Tebogo Lekgethwane said the temporary structure was not yet completed. He said material for the structure was expected in September.

He said it would be completed in November.

Lekgethwane said that, at the moment, patients were transported by buses to nearby health facilities.

Did you know you can unlock this article for a friend who’s not yet a News24 subscriber? Click the gift icon at the top of the page.
We live in a world where facts and fiction get blurred
In times of uncertainty you need journalism you can trust. For 14 free days, you can have access to a world of in-depth analyses, investigative journalism, top opinions and a range of features. Journalism strengthens democracy. Invest in the future today. Thereafter you will be billed R75 per month. You can cancel anytime and if you cancel within 14 days you won't be billed.
Subscribe to News24
Next on News24
BREAKING NEWS LIVE | Suspect arrested for Intercape bus attacks