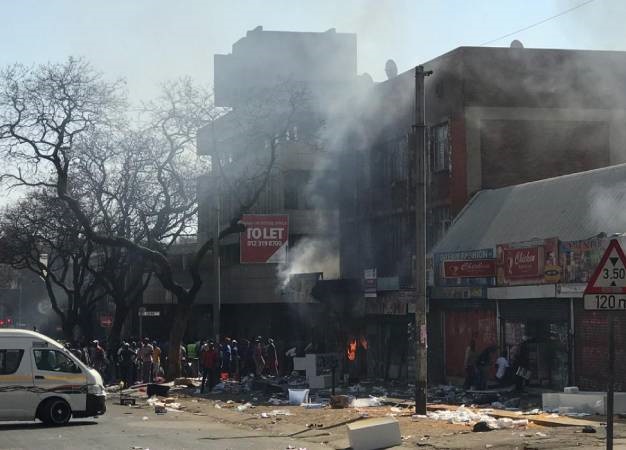 Shops are burnt and looted in the Pretoria CBD. (Alex Mitchley, News24)

Security has been beefed up in Pretoria following widespread rioting and looting on Wednesday.

The capital came to a standstill after thousands of taxis blocked several roads in the CBD to protest the killing of one of their colleagues.

Buildings were set alight, widespread looting occurred and streets blockaded during a protest by taxi operators.

The City of Tshwane confirmed the riots were the result of the taxi driver's death on Tuesday - he was shot dead near the Bloed long distance taxi rank in Pretoria.

The Sowetan reported taxi operators had found people, suspected to be police officers, allegedly involved in the selling of drugs on Tuesday.

Taxi operators then used buses to block traffic to "deal" with the nyaope boys.

The police and Tshwane Metro Police Department have since intensified deployments and will maintain a presence in the CBD to ensure no further incidents occur.

Meanwhile, 10 people were arrested for the possession of suspected stolen property, while seven others were held for public violence.

Taxi industry representatives have distanced themselves from the incidents of looting that took place in the Pretoria CBD, and reiterated, on behalf of their operators, there was no aggression on their part.

South African National Taxi Council representative Mack Makata said the council "had planned for a demonstration to highlight some of the issues with the shooting of one of its members".

Mataka added they believed some criminal elements had taken advantage of the situation to advance their criminal intent.

Mawela said the police would look into the allegations and assured the taxi industry that feedback would be given shortly.

"The taxi industry plays an integral part in the well-being of our communities so when they cry out for police attention, it is important that we respond positively and swiftly, in the best interests of the community," he added.

Mamabolo urged the police to prioritise the investigation of the murder case.

We live in a world where facts and fiction get blurred
In times of uncertainty you need journalism you can trust. For 14 free days, you can have access to a world of in-depth analyses, investigative journalism, top opinions and a range of features. Journalism strengthens democracy. Invest in the future today. Thereafter you will be billed R75 per month. You can cancel anytime and if you cancel within 14 days you won't be billed.
Subscribe to News24
Related Links
Taxi drivers, 'drug dealers' and looting: Pretoria CBD's day of chaos
WATCH | Widespread destruction in Pretoria CBD after protest descends into looting spree
'Absolute chaos' in Pretoria CBD - News24 reporter
Next on News24
LIVE | Covid-19 in SA: 4 074 new cases