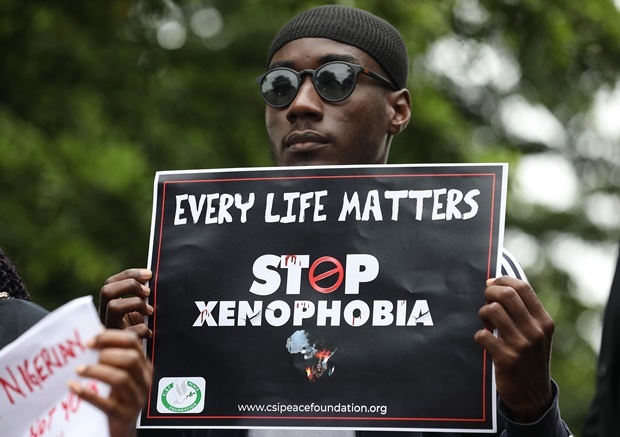 A demonstrator holds a sign during a protest against xenophobia outside of the main gate of the South African High Commission which was shut down to avert reprisal attacks in Abuja. (Kola Sulaimon, AFP)

Envoys sent by President Cyril Ramaphosa to African countries to apologise for SA's xenophobia will not solve the heart of the issue, KwaZulu-Natal House of Traditional leader's chairperson Inkosi Phathisizwe Chiliza has said.

The outspoken Chiliza was commenting on various issues discussed by the provincial traditional leaders in a press briefing in Durban on Wednesday.

"Attacks of foreign nationals won't be solved by [the] president's meeting in foreign lands or having the discussion in big tents. What will solve the issue is going to grassroots and asking what the problem is."

He said when government reached the ground level, they would be able to understand the complexity of the issue better.

Chiliza added that many foreigners did not respect SA traditions.

"When you get to those levels, they will tell you that they are taking our jobs, the problem is they are here in their numbers and they don't respect our traditions and that is what needs to be fixed."

He said the anger from South Africans had to be looked at to understand where it comes from.

"Fighting and killing won't help we need to make sure that all these people [foreign nationals] have the correct documentation, if they don't, the police must do their job and return them to their home countries."

He added: "We ask that if anyone wants to help with the issue of the attacks, we plead with them to look at the issue at grassroots."

Answering questions on the potential scrapping of the Ingoyama Trust, Chiliza said land could not be removed without discussion.

"To be honest, I need to make it clear, as a traditional house, that when you look at the laws of this country it makes it very clear that you cannot touch someone else's property without talking to them or reaching an agreement."

He said if the Ingoyama Trust Board had to be amended or dismantled, it could not be done "by just anyone".

"If someone wants to do that they will need to sit down with traditional leadership and the king and the Ingonyama trust board and state their case about what needs to change."

Chiliza added: "We aren't fighting anyone, it's just the laws of the country, if we are speaking about the Ingoyama Trust Board, we are talking about an entity that are the legal custodians of the land according to the law."

We live in a world where facts and fiction get blurred
In times of uncertainty you need journalism you can trust. For 14 free days, you can have access to a world of in-depth analyses, investigative journalism, top opinions and a range of features. Journalism strengthens democracy. Invest in the future today. Thereafter you will be billed R75 per month. You can cancel anytime and if you cancel within 14 days you won't be billed.
Subscribe to News24
Related Links
300 more Nigerians flown home in wake of xenophobic violence in SA
Xenophobic violence: Mashaba says he has 'nothing to apologise for'
Melanie Verwoerd: South Africa's biggest problem isn't what you think it is
Next on News24
BREAKING NEWS LIVE | Patient dies after jumping from window at Steve Biko Academic Hospital