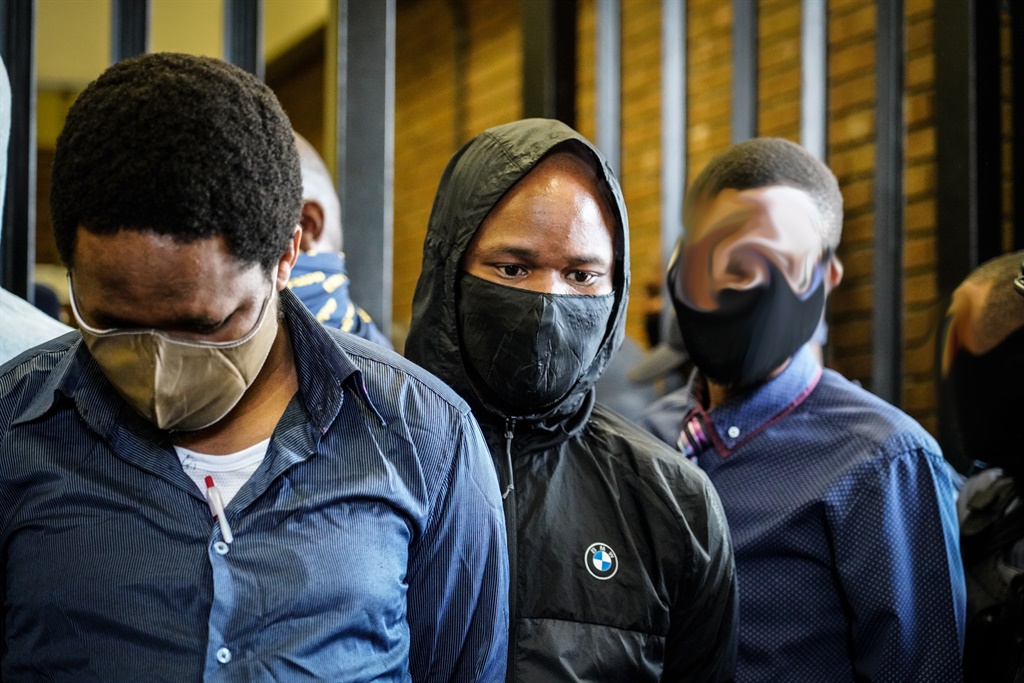 Police are scouring social media messages that may link the five people accused of Senzo Meyiwa's murder to the alleged mastermind, according to a Sunday Times report.

This week, the five accused appeared in court in connection with the former Bafana Bafana captain's 2014 murder.

According to the prosecution, Meyiwa was killed in a botched robbery. However, Police Minister Bheki Cele has said that the investigation has not really confirmed that it was a robbery gone wrong but that it has also not conclusively shown it was a hit.

The social media messages discovered during the questioning of two suspects may include communication between the five accused, the middlemen and the alleged mastermind, and began four months before the murder, the report said.

In another Sunday report, the Sunday Independent reported that more arrests were likely, with police looking into at least three more suspects.

Meanwhile, the five accused have been linked to other crimes.

Mncube was arrested in February 2015 for the murder of Alexandra taxi boss Reggie Mohlala and is serving a 30-year sentence. Ntanzi and Maphisa were in prison for taxi industry murders, and Ntuli is in prison awaiting trial for his alleged involvement in political killings.

During their appearance, the five accused said they were being implicated because "they did not have money", while those "with money" were out on the loose, News24 previously reported.

Police first arrested Sibiya in March last year and, after he skipped bail, he was rearrested in Tembisa this year. Information from Sibiya then led to Ntanzi, a former miner in Rustenburg. Ntanzi and Sibiya are understood to have implicated the others.

Last week, News24 also reported that the pistol allegedly used to kill Meyiwa was found at the Cleveland police station in Johannesburg, where it had been held after the murder of Mohlala.

Prosecutors may also look into the communication records of actress and singer Kelly Khumalo, who was in a relationship with Meyiwa at the time.

A confidential National Prosecuting Authority (NPA) instruction note to detectives was accidentally attached to the indictment presented to the court. It stated that Khumalo's cellphone records must be obtained, previous reports said.

Khumalo's lawyer, Magdalene Moonsamy, told the Sunday Times her client was not implicated nor charged in the matter and that she was not a suspect.

NPA spokesperson Sipho Ngwema declined to respond to the Sunday Times' questions about the prosecutors' instructions, saying this would compromise the investigation.

Did you know you can comment on this article? Become a News24 subscriber to read and post comments.
We live in a world where facts and fiction get blurred
In times of uncertainty you need journalism you can trust. For only R75 per month, you have access to a world of in-depth analyses, investigative journalism, top opinions and a range of features. Journalism strengthens democracy. Invest in the future today.
Subscribe to News24
Related Links
Senzo Meyiwa: Who is the 'mastermind'? 7 unanswered questions - new & old
WATCH | Five people accused of Senzo Meyiwa murder appear in Boksburg court
'My wish is to meet with Senzo's family' - 'vindicated' Chicco Twala after arrests
Next on News24
LIVE | Covid-19 in SA: 53 new deaths as cases hit 2 920 109