The Kepkey family is mourning the death of mother and wife Anncha, a nurse at Tygerberg Hospital who contracted Covid-19.
Supplied by the Kepkey family

Anncha Suzane Kepkey had so much to look forward to: becoming a gran in just two weeks' time; hanging up her nursing gown in three years' time; and buying a dream cottage, by the sea, with her dear husband.

But the Cape Town nurse never got to experience these longed-for moments.

Instead, she died of the Covid-19 illness in May.

Kepkey, aged 52, was a vastly-experienced nurse and served as Assistant Manager Nursing, Trauma and Emergency Services at Tygerberg Hospital.

She would have served for 30 years in the profession she loved at her retirement.

Her husband, William George Kepkey, talked through the painful journey to her death.

"Anncha grew up in George, and has been a trauma nurse since the 1990s," he explained from his home in Klipkop, Parow, in Cape Town's northern suburbs.

"She was promoted at the beginning of April.

She was the perfect nurse. To be honest with you, we came second, our whole lives. I had to bring up the children because she worked such long hours.
William George Kepkey

"She even went to work when there was a sister short - she was always willing to work a sixth day a week, with just one rest-day. She lived for her work," Kepkey said.

The couple have two sons, Chadley, 29, and Angeo, 22 - who are both in the information technology industry.

"Chadley is expecting his first-born in two weeks. She looked so forward to that - our first grandchild.

"And Angeo finished his four-year IT degree in November, and started his first job in January."

Anncha sacrificed so much, he continued, saying she had been the breadwinner when they were struggling financially, and had to put Angeo through school.

"She would have been extremely proud of his capping ceremony in May. I can remember she said: 'The day he is capped, I'm going to make a big noise in that hall!'"

Kepkey said he and his sons loved fishing, and he had spent many a weekend taking them to coastal villages like Hermanus, Langebaan and Paternoster, while their mother was hard at work nursing.

"She intended retiring when she was 55, and she always told me: "We will buy a holiday home, at Struisbaai or at Cape Agulhas, a 'fixer-upper'. 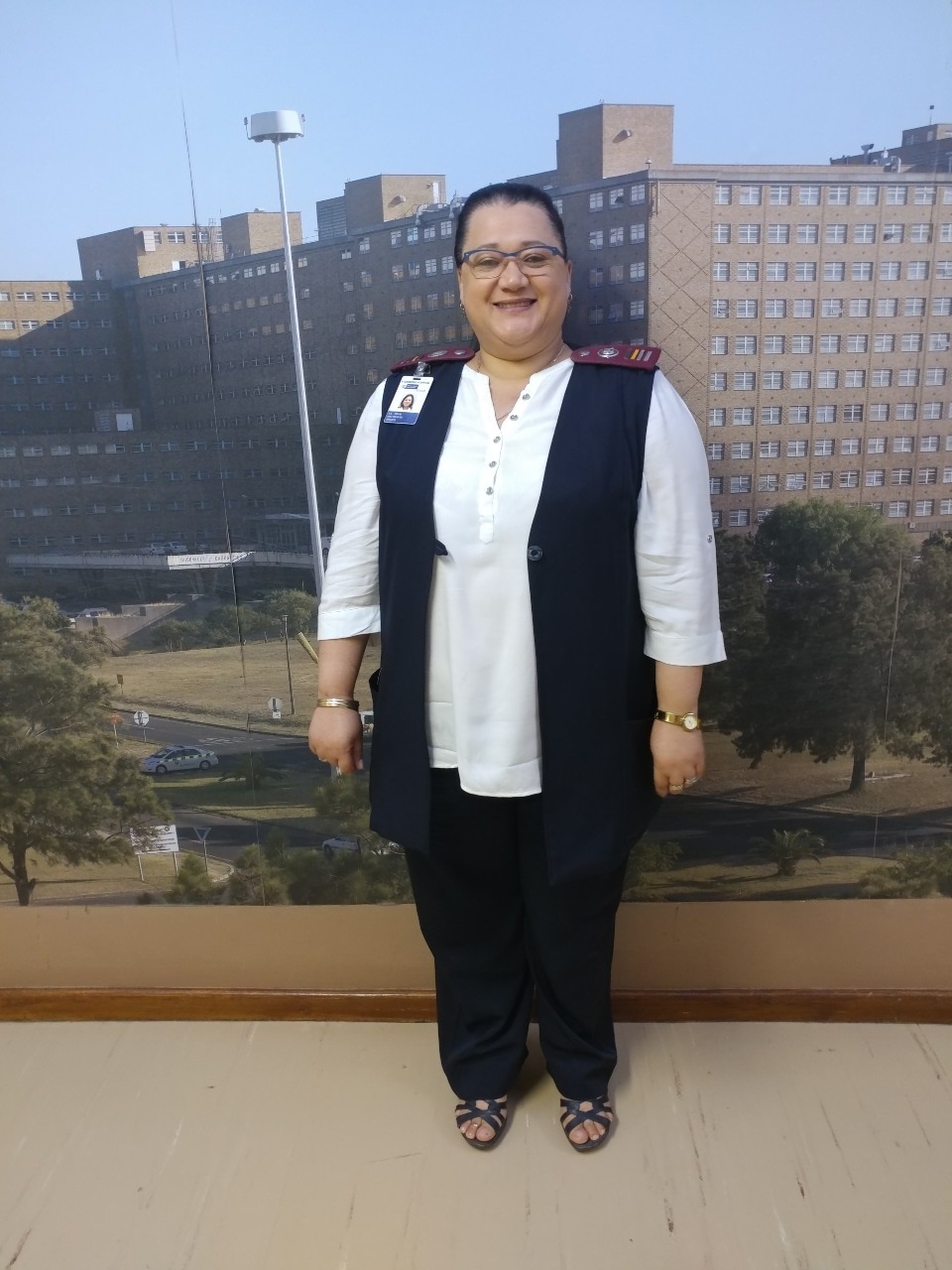 The couple celebrated their 30th wedding anniversary on 28 October 2019 - and shared great hope for their future.

On a recent Sunday, his wife had listened to Heart 104.9. "That was her dearest thing: preparing lunch, while singing along. I also played two of her favourite songs, Kenny Rogers' 'Through the years', and 'My way', by Frank Sinatra."

But a fortnight before her death, "she had a premonition", her grieving husband said.

"She walked past me and said, 'George, I must thank you for what you have done for these two boys. You have brought them up, broadened their horizons so much. We must do the same for our first grandson.'"

Kepkey said his wife had carried a terrible "fear of being infected".

"Right across the house we have sanitation bottles. She even walked with one. She coached us continuously."

His wife had suffered from high blood pressure, but he believed she had this "under control".

"She went to work on the 26th of April. It was the first Sunday in a while she had to work," he explained. Her work had included service in the "Covid tent" - the temporary field hospital established at Tygerberg.

"On that Monday, her colleague she worked side-by-side with the day before started displaying a headache. She went to Melomed hospital and was booked off sick.

My wife continued to work, but she had this worried look in her face, a deep sense of something wrong.
William George Kepkey

"A week later, on Monday May 4, I dropped her off at work. I kissed her. At four o-clock, I went to fetch her, and her face  was blood-red, I thought it may be from wearing a mask.

"She said we need to keep our distance. That night, I could hear she was breathing more heavily than usual.

"On Wednesday evening, we were sitting in the living room, she said: ‘You need to take me to the hospital, I feel short of breath.'"

He had immediately taken her to Melomed hospital in Belville.

"On Thursday morning, we spoke, and she told me: 'They said there's something wrong with my lungs – I need X-rays'.

"I took her her toiletries, and her phone charger - because she said she was now waiting for a bed in the Intensive Care Unit," he explained. "Later, she messaged me to say she was now on oxygen.

"Then, at about 12 noon, she messaged me to say: 'I've been tested positive. You and Angeo need to get tested – immediately.”

Neither the father nor son had shown any symptoms, but they had obeyed her, and went to a medical facility to be tested.

"She also said we must get some vitamins, to boost our resistance.

"The next morning, Friday morning, a rumour started spreading on social media that my wife had died in hospital. I was shocked. I phoned her phone, didn’t answer, I started getting really worried.

"I phoned the hospital, they gave her the phone, and lo and behold, she started speaking! She said it was a nurse at Tygerberg, who had died - her colleague.

"It was one of the best moments of my life!"

"She said to me she was feeling better - and they intended moving her out to a normal ward. On Saturday, she sounded even better. She said she didn't want to speak for long, so she didn’t tire. She said she had many calls, because she is very popular, she had had many calls.

"On Sunday, my son phoned me, on Mothers’ Day. He said: 'Mommy doesn't sound very good.'

"I phoned her, I could hear she was short of breath. She said she was no longer in ICU, and they had moved her to a normal ward." The Kepkey family is mourning the death of mother and wife Anncha, a nurse at Tygerberg Hospital who contracted Covid-19.

The husband had then tried to mobilise every one of their family and friends - "I asked everybody to pray for her.

"On Monday morning, I spoke to her. I couldn't understand what she was saying. She was trying to explain something to me, there was an urgency in her voice…

"I sat down on my driveway, on the ground… I was very concerned.

"Then my son came with the portable house phone, and said it was the doctor. He told me: 'Mr Kepkey, she has been doing so well, but now you had better speak to her, and say what you want to say, because she’s going to be put on a ventilator, and people do not normally come out of that.'"

He had tried to call his wife, to do precisely that.

"But she didn't answer her phone."

In the days that had followed, "I phoned the hospital every day.

"On the Tuesday, they said she was unstable, on a ventilator. But hanging in there.

"On the Friday morning, a nurse told me: 'Good news, she's stable!'

"We all kept on praying."

Then came Wednesday, 20 May, 23 days after that Sunday shift on April 26, when she may have caught the virus: "At 04:15, I was lying in bed. She always had a habit of nudging me with her elbow. I felt that nudge, I woke up. I got up, opened the front windows, I watched TV, waiting to phone at 9am, as normal.

"At 7.30am, a nurse phoned, who has been encouraging me the whole time, she loved my wife so much. And she said: 'Mr Kepkey, your little angel is now in heaven.'"

At this point in the interview with News24, Kepkey wept. When he was able to summon the strength to speak again, he said softly: "I believed she died when I felt that nudge.

"I somehow knew: She's not coming back."

He had then gone to break the news to their sons.

We live in a world where facts and fiction get blurred
In times of uncertainty you need journalism you can trust. For only R75 per month, you have access to a world of in-depth analyses, investigative journalism, top opinions and a range of features. Journalism strengthens democracy. Invest in the future today.
Subscribe to News24
Related Links
'He died on duty, doing what he loved': Wife's tribute after cop husband succumbs to Covid-19
'He was not just a number, he was a person' - Durban family's heartache after dad dies of Covid-19
Covid survivor ‘not an alien’
Next on News24
LIVE | Ramaphosa slams countries' 'unjustified' travel restrictions: 'It hurts developing nations'