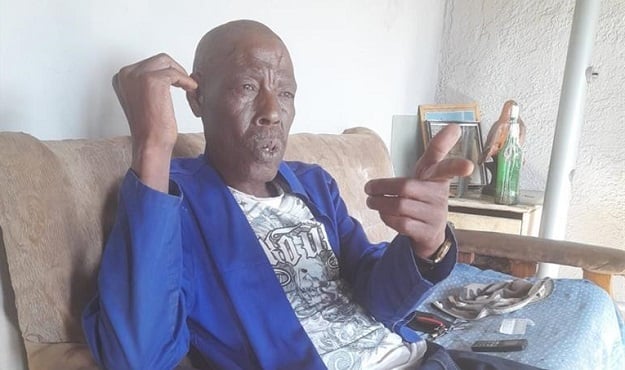 The man who has laid charges against Operation Dudula leader Nhlanhla "Lux" Dlamini, is demanding justice and accused the police of doing nothing as his home was ransacked by the movement's members.

"I want Nhlanhla 'Lux' Dlamini to pay for his deeds."

Victor Ramerafe poured his heart out after he was accused of being a drug dealer by Operation Dudula members.

Ramerafe, 59, later opened a housebreaking, theft and malicious damage case against Dlamini at the Dobsonville police station after the movement's members allegedly stormed into his house looking for drugs. None were found.

"I was away when they arrived. On my arrival, I saw members of Operation Dudula chanting freedom songs outside and inside my yard. Some, including Dlamini, were inside my house," said Ramerafe.

"I don't know how they accessed my house because it was locked. They forcefully entered my house in my absence.

“My house was ransacked. All my belongings were on the floor. I confronted Dlamini and asked who opened for him. He aggressively responded that they were looking for drugs. They accused me of being a drug dealer."

#nhlanhlalux Nhlanhla Lux addressing his supporters who stood by him during his 4-day incaceration. He is out on R1500 bail @TeamNews24 pic.twitter.com/mYOMjdU777

"He was pushing me. I warned him to stop what he was doing. I asked if he had found those drugs since they had ransacked my house. The police were standing outside watching.

"My house was ransacked by people not authorised to search my property. The police were spectators who didn't help me. They only told me to open a case at the Dobsonville police station."

Ramerafe added that some female members of Operation Dudula made insults about his mother.

He said police failed to act and claimed they stood by and did nothing. "They should have arrested Dlamini on the spot. I don't smoke nor sell drugs. One of my neighbours is behind calling Operation Dudula on me. I think the person wanted a position by framing me.

"I am traumatised by this incident. I am battling to sleep. I am grateful for the EFF to support me fully. I want Dlamini to pay for the damages he has done."

Ramerafe confirmed that in 2010 he was released on parole after serving seven years of a 15-year-jail term for armed robbery.

"I served my time in jail. I am a changed man. I have never been arrested since my release in 2010. I am rehabilitated. I don't know what Operation Dudula members are planning against me. I want justice."

The Roodepoort Magistrate's Court released him on Monday after he had spent four days incarcerated at the Johannesburg Central police station.

His supporters and friends believe the EFF orchestrated his arrest.

The red berets have denied the allegations.