'That is what I call good news!': News24 readers respond to news of subscription service 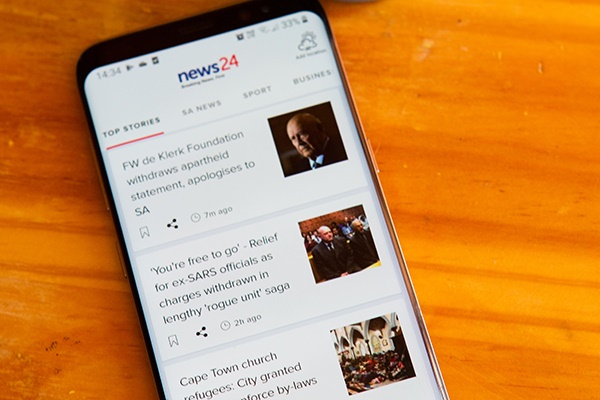 Readers on Monday responded with overwhelming positivity to the news News24 is planning to launch a digital subscription service.

In his weekly column, News24 editor-in-chief Adriaan Basson wrote the publication, by far the biggest in South Africa, planned to launch a subscription service based on a freemium model, where the majority of articles on the site would remain free to read, while readers would pay to access premium content and features.

"No nation can progress and grow without the ears and eyes and mouth of sound investigative journalism," Rob Jobling wrote in an email to News24.

"Our nation in particular, where so much has been swept under the carpet that the carpet is now flush with the ceiling, needs dedicated journalists to dig out and expose the truth which, once the perpetrators of, for example, state capture are brought to justice, will bring a new sense of trust and pride in our country."

Carol Sherwin wrote: "News24 has kept me up to date with everything that is relevant and important in the world today, and especially in SA … regular updates that really are up-to-the-minute and appear on my phone timeously!"

"Now, that is what I call good news!" wrote Henri Zondagh from Fourways, Johannesburg. "Nowadays, having access to quality journalism feels like a 'relief' at times and surely a breath of fresh air, every time one reads insightful pieces of investigative journalism, balanced and well-founded columns and opinions.

"Quality and reliable journalism is not just a 'nice to have', but an absolute necessity in an ever-growing jungle of 'news' where facts and fiction get blurred more and more."

And Simon Letsoko said: "I am ready for the new normal in journalism. We welcome the new initiative and hope to receive the same quality of news albeit digitalised!"

With the traditional media business model all but broken, a new sustainable model was necessary to secure the future of journalism, Basson wrote in his column. He invited readers to join News24 to enter this new era.

Many readers responded with questions about what a subscription would entail. More information about this will be announced in the coming days and weeks.

"It has been a wonderful day for me and the News24 team, seeing the overwhelmingly positive response from our readers to the announcement that we will be launching a digital subscription service in August," said Basson. "We are humbled and delighted by the trust News24's readers place in us to tell the stories that matter and to hold all power to account."

We live in a world where facts and fiction get blurred
In times of uncertainty you need journalism you can trust. For 14 free days, you can have access to a world of in-depth analyses, investigative journalism, top opinions and a range of features. Journalism strengthens democracy. Invest in the future today. Thereafter you will be billed R75 per month. You can cancel anytime and if you cancel within 14 days you won't be billed.
Subscribe to News24
Related Links
OPINION | 500 journalists may have just lost their jobs while quality news is more important than...
Covid-19: Sanef launches relief fund for journalists who have lost jobs, income
ANALYSIS | Covid-19 has shown that readers are (again) willing to pay for quality journalism
Next on News24
BREAKING NEWS LIVE | City of Joburg council elects member from one of metro's smallest parties as mayor