The state of Chris Hani Baragwanath Hospital: No mask for trauma patient as stretched staff soldier on 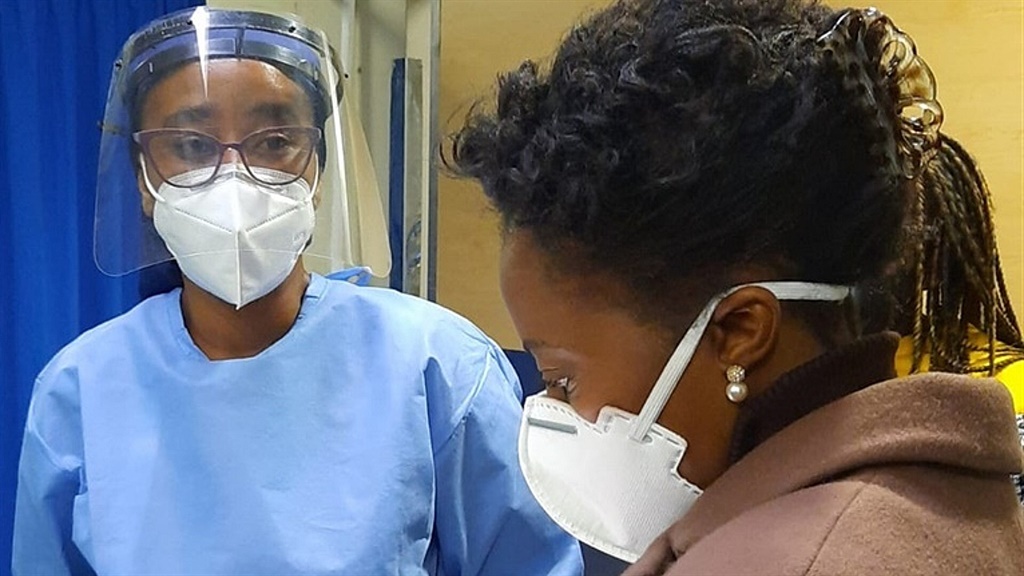 Chris Hani Baragwanath Academic Hospital in Soweto has a shortage of staff, which is hampering the provision of service to patients.

This was the overview of the Office of the Public Protector following its visit to the healthcare facility on Wednesday.

The office had been embarking on oversight visits at public healthcare facilities across the country to assess the state of the system and to get first-hand experiences from staff and patients regarding the provision of services.

While the management reported that it had sufficient provision of PPE, the office was informed by staff on the ground that the equipment did not reach them in time for them to use.

DPP Adv Gcaleka is interacting with employees and patients to find out their daily experiences amid Covid-19. (@Sesona_Ngqaks) pic.twitter.com/5YVNKxcFmK

"At casualty, for instance, one of the patients we found at the trauma area had been there for a day now and they do not have a mask on, so staff has to work around that patient when that patient doesn't have a mask, which puts staff at risk," Gcaleka said.

The staff also reported challenges with laundry and shortages of linen, as well as in the kitchen area where there were internal procurement gaps and problems with space, making it difficult to adhere to physical distancing protocols.

Patients also pointed out that there was a lack of signage at the hospital, which made it harder for them to find their way around the facility.

"They (patients) are also complaining about their waiting time; that they have to wait for a very long time. There's no sufficient care that's being given to them as patients, and some even have to walk away without being attended to because of the waiting time and the lack of care," Gcaleka said.

Gcaleka said all the issues flagged from the various hospitals would be reported to the Health Department at national level, to premiers and the health ombud.

She said it was evident that the hospital struggled with capacity, but that the staff were doing its best under the circumstances. However, improvements had to be made, because, should a second wave of Covid-19 occur, these facilities would be challenged to cope.

Mankupane reported that the hospital had been allocated funds in three phases to beef up human resource needs.

He said around R98.2 million was the latest allocated funds to the facility. The acting CEO said the hospital was consulting different departments so that they could state what they needed in order for them to receive the necessary interventions.

This is one of the kitchens where food for patients at Bara is prepared. @TeamNews24 pic.twitter.com/6mFnu3UYaG

Mankupane said while funds were allocated, sometimes the hospital did not have existing vacancies, which meant posts needed to be created and a process had to be followed.

"To create a post is not only a function of the department of health, it goes to treasury. We also had a challenge of appointees not accepting [posts]."

In terms of PPE, there was sufficient stock available for different healthcare workers, the acting CEO reported.

The hospital had also established a PPE committee to evaluate, advise and recommend appropriate PPE for various areas.

It further reported experiencing challenges of non-availability from contracted suppliers - also, that those stocks provided were of substandard quality and extended waiting periods for delivery.

To mitigate these challenges, the hospital moved to order and replenish ward stock every week and ordered it from the provincial level.

Responding to the challenges reported by staff and patients during the walkabout, the acting CEO said the exercise had allowed management to reflect on the feedback and criticism.

"We take all the criticism made positively, and I promise the deputy public protector that we will improve and work on issues we have picked as they were raised by respective members of the hospital community as well as the people who came from outside," Mankupane said.

He said the hospital continued to headhunt doctors to ensure there was enough capacity to handle the influx of patients.

"One of the issues that have made [the hospital] less appealing was the workload, as we know. But with the assistance of the province, giving us three phases of HR improvement [and] financial support I think when we get more staff, the workload becomes less and then it becomes attractive for doctors to know that they will come and work in an environment that is better improved," added Mankupane.

We live in a world where facts and fiction get blurred
In times of uncertainty you need journalism you can trust. For 14 free days, you can have access to a world of in-depth analyses, investigative journalism, top opinions and a range of features. Journalism strengthens democracy. Invest in the future today. Thereafter you will be billed R75 per month. You can cancel anytime and if you cancel within 14 days you won't be billed.
Subscribe to News24
Related Links
Eastern Cape R2.7m mortuary almost complete, concerns raised over high Covid-19 mortality rate
Covid-19: Black Africans, Coloured people more likely to die in hospital - NICD report
CTICC Hospital of Hope to close as Covid-19 declines in Western Cape
Next on News24
LIVE | Covid-19 in SA: 4 074 new cases