'This is a Titanic approaching': Street parties in Soweto shut down as residents flout Covid-19 rules 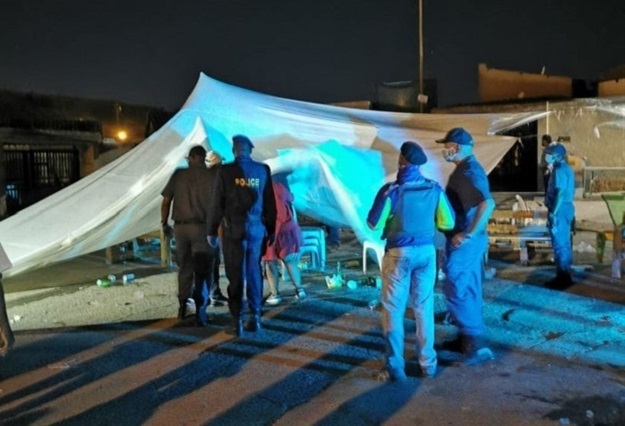 Police shut down a street party in Diepkloof, Soweto.
SAPS

Police had to deal with thousands of people partying in Diepkloof, Soweto, on Saturday night, with no social distancing and many not wearing masks.

Venues were packed to the rafters, with vehicles blocking access to streets.

The SA Police Service and the Johannesburg Metro Police Department took the "O kae Molao" operation to Diepkloof as part of law enforcement during the Easter holiday.

READ | Lockdown: Here are all the rules for Easter weekend

"This is a Titanic approaching, more infections are coming. People are sharing hookah pipes and not wearing masks. Isn't it that we're supposed to be wearing masks and not sharing anything? What's happening here is very disappointing," Mazibuko told eNCA on the sidelines of the police operation.

Gauteng @SAPoliceService Major General Mthombeni addressing the members of the media on #OkaeMolao operation that is currently underway. pic.twitter.com/kfBrdS2Agl

She added that the widespread disregard for Covid-19 regulations would soon lead to more infections.

As part of police operations over the weekend, a man was arrested in connection with the torching of a police vehicle at a Muldersdrift tavern and an attack on two police officers in the early hours of Saturday morning, said acting Gauteng police commissioner Major-General Tommy Mthombeni.

Patrons of an unlicensed liquor outlet allegedly attacked the officers, who had responded to a complaint of disturbance of the peace at Video informal settlement, News24 reported.