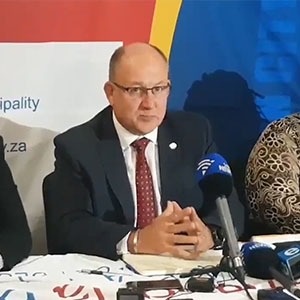 Nelson Mandela Bay Mayor Athol Trollip has effectively survived a motion of no confidence after a special council meeting to debate it was permanently adjourned on Tuesday morning.

The meeting only lasted about an hour and a half before a shouting match ensued in council and the meeting collapsed.

Speaker Jonathan Lawack then declared that the meeting was permanently adjourned.

Other motions that had been tabled for Tuesday included:

A majority of councillors was needed to bring a new motion.

The coalition government has had a minority of 59 seats in the 120-seat council since a fallout with the UDM.

However, it recently secured the Patriotic Alliance (PA) as a coalition partner, taking it back up to 60, and the African Independent Congress has also declared its support for the coalition, giving it a potential majority vote of 61.

The opposition had the option of lobbying DA councillors to sign the petition for a motion.

The previous council meeting on March 29 also descended into chaos before the motion to remove Trollip could come up for debate.

It was postponed to Tuesday after more than eight hours of bickering and disorderly conduct that led to several adjournments.

But on Tuesday, chaos erupted when the ANC objected to DA councillor Nqaba Bhanga addressing the council.

Bhanga managed to conclude a tribute to Winnie Madikizela-Mandela despite the opposition drowning him out.

When Lawack said they would proceed with the agenda, EFF councillor Zilindile Vena immediately interjected and said the speaker could not suspend the rules and not listen to points of order.

Lawack countered that he had not suspended any rules.

EFF councillor Vena continued to shout that Lawack was collapsing the meeting.

Lawack replied that it was the councillors who were deliberately trying to collapse the meeting.

Speaking after the second failed sitting, PA councillor Marlon Daniels said he expected the chaos after again being offered the mayoral post upon entering the chamber on Tuesday.

He said he was told by several individuals: "Come and assist us, you are our mayoral candidate. If we remove Trollip today, we will put you in as mayor. Otherwise there will be chaos in this thing if are not going to come with us".

Daniels said the PA was the kingmaker and "nothing is going to happen without us".

At a press conference after the meeting, Trollip said it was "time to call a spade a spade in politics" and that those responsible for the chaos must accept responsibility.

"We were ready to debate the motions today but we are not going to be held to ransom by people who cannot accept democratic outcome."

We live in a world where facts and fiction get blurred
In times of uncertainty you need journalism you can trust. For only R75 per month, you have access to a world of in-depth analyses, investigative journalism, top opinions and a range of features. Journalism strengthens democracy. Invest in the future today.
Subscribe to News24
Related Links
Nelson Mandela Bay council reconvenes to hear motion to remove Trollip
Athol Trollip re-elected as DA federal chairperson
WATCH: Trollip confident he'll retain DA Federal Chair post
Next on News24
LIVE | SA records 1 559 113 Covid-19 cases and 53 356 deaths

1 person bags the Daily Lotto jackpot
Full list of lottery results
Lockdown For
DAYS
HRS
MINS
Voting Booth
Would you choose to continue working from home after the coronavirus lockdown if given the option?
Please select an option Oops! Something went wrong, please try again later.
Yes, it's much better for me
40% - 7184 votes
No ways! I can't wait to get back to the office
12% - 2107 votes
A mixture of both would suit me best
48% - 8648 votes
Previous Results
Podcasts
PODCAST | MISSING MATTHEW EPISODE 3: Decades of false starts add to a family's despair