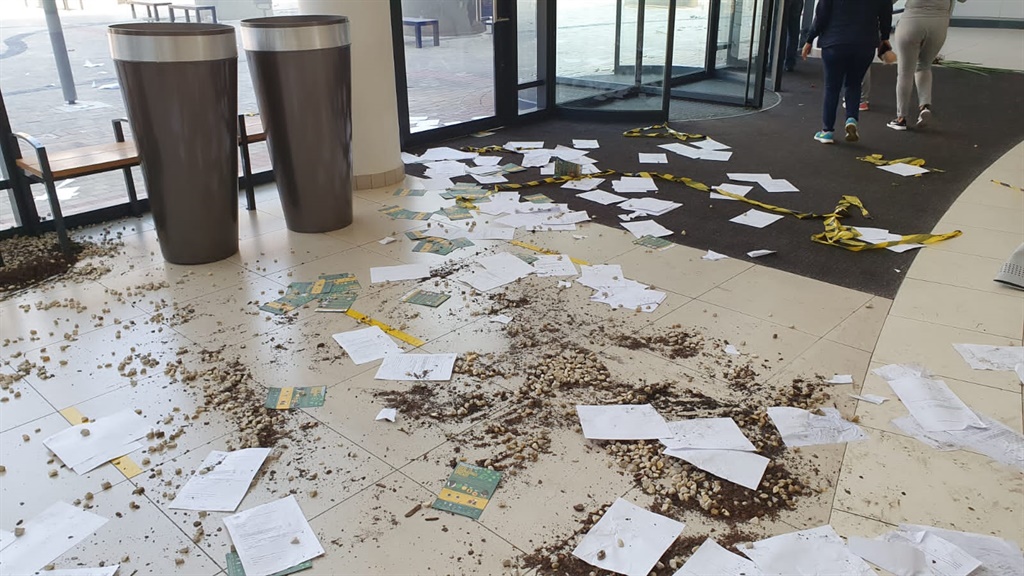 Damages resulting from a SAMWU protest in Tshwane.
PHOTO: Supplied by City of Tshwane

The head offices of the City of Tshwane, Tshwane House, were damaged during a South African Municipal Workers' Union (Samwu) members protest on Tuesday.

Bins were emptied and litter was strewn through the streets.

The A Re Yeng bus service has suspended some of its routes in anticipation of another protest on Wednesday.

Due to the anticipated protest within the City Centre. Kindly note that operations of our F5 and F6 will be suspended tomorrow 22 July 2020 for safety reasons. @CityTshwane

Tshwane head administrator Mpho Nawa said: "The right to strike is entrenched in the Constitution, but no one has the right to damage the property of the municipality and trash the streets with litter. This behaviour borders on criminality. We hope that the police will do their job and bring to book the responsible culprits."

Nawa said the special Local Labour Forum (LLF) held a meeting with administrators and representatives of Samwu and the Independent Municipal and Allied Trade Union (Imatu) to decide on the implementation of the 6.25% annual wage increase and the benchmarking collective agreement.

He said a decision on the matter was not made following a meeting on 16 July, and added that the Samwu leadership had walked out of the gathering, leading to a lack of quorum and causing it to collapse.

Nawa said both unions disputed the City's request to make a proposal on how the 6.25% could be structured, adding that it was unfortunate because the administrators had reported the state of the City's finances during the meeting that was held on 16 July.

"This is besides the fact in all the interactions between the administrators and union leadership, the City reiterated its commitment to honour the agreed 6.25% wage increment agreement and this was restated at this meeting.

It is public knowledge that over the passage of time, the City's revenue has been declining and this problem was compounded by under-collection due to the Covid-19 pandemic.

"As we continue with our negotiations with union leadership, we call upon all employees to have a full appreciation of the financial challenges the City finds itself in. As administrators, we want to see our employees happy, employed and avoid future retrenchments.

"Thus, our position to honour a 6.25% wage increment remains on the table and we have not reneged on this commitment that we have communicated to union leadership."

In a statement on Tuesday, Samwu said administrators had committed to implement all signed collective agreements during their first meeting with unions after their appointment.

"On the 16th of July 2020, the administrators confirmed to the Local Labour Forum that amongst other commitments, the City will pay the 6.25% salary increase which is due to workers. An instruction was issued to officials to load money for payment. It is unfortunate that on Monday, 20 July 2020, administrators took a unilateral decision to reverse such payments," the union said.

The union added that it has since given administrators an ultimatum to confirm that all collective agreements would be respected and implemented, adding that "they have until 12h00 on 22 July 2020 to assure workers that all will be covered on 24 July 2020".

It appears that the administrators have an appetite to sabotage collective agreements while senior managers continue to enjoy benefits and they were paid all their monies amounting to millions of rands. We are also aware that the City has budgeted, approved and has in excess of R1.3 billion that would be enough to pay workers what is due to them.

"Failure to honour all collective agreements in the City would be a declaration of war; war that municipal workers are ready to fight in defending collective bargaining and their gains.

"The City should not test us. The ground is fertile. If it is war that the administrators want, municipal workers will respond appropriately."

We live in a world where facts and fiction get blurred
In times of uncertainty you need journalism you can trust. For only R75 per month, you have access to a world of in-depth analyses, investigative journalism, top opinions and a range of features. Journalism strengthens democracy. Invest in the future today.
Subscribe to News24
Related Links
Union concerned about Tshwane workers, service delivery after council meeting collapses again
Governance in embattled Tshwane raises ire of marching Samwu members
No new City manager for Tshwane any time soon
Next on News24
LIVE | Covid-19 in SA: Cases top 800 000 as death toll reaches 21 803