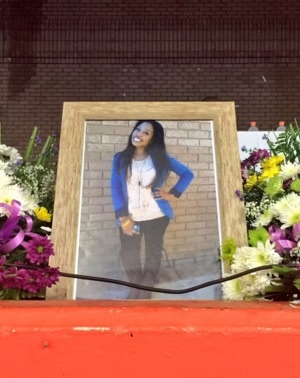 An image of Palesa Madiba at a memorial held for her. (Twitter)

The murder trial of a man accused of killing University of Johannesburg student Palesa Madiba six years ago has been transferred to the high court.

The case was transferred from the Protea Regional Court in Soweto on Monday.

Dumisani Mkhwanazi, 36, is expected to face charges of murder and defeating the ends of justice in the Gauteng High Court in Johannesburg.

National Prosecuting Authority Gauteng spokesperson Phindi Mjonondwane said a pre-trial hearing would be held on October 25 in the high court to determine the trial readiness of the State and defence.

Mkhwanazi was arrested on July 29 following the discovery of Madiba's skeletal remains in a shallow grave in his parents' yard.

Her remains were found on December 16, 2015, after the police received an anonymous tip-off.

Mkhwanazi was allegedly in hiding in Protea after he had learned the police were looking for him.

Following the discovery, Mkhwanazi was taken in for questioning by the police but later released. He then obtained a restraining order against the Madiba family, claiming they were harassing him.

His neighbours in Phiri described him as a dangerous man who was always armed with a pistol.

Madiba was last seen alive on August 9, 2013, when she visited her friend, Tshidi Mkhwanazi, in Phiri, Soweto.

At the time, Tshidi claimed she had spent time with Madiba and later left her friend alone at her Phiri home when she went to work.

We live in a world where facts and fiction get blurred
In times of uncertainty you need journalism you can trust. For only R75 per month, you have access to a world of in-depth analyses, investigative journalism, top opinions and a range of features. Journalism strengthens democracy. Invest in the future today.
Subscribe to News24
Related Links
Palesa Madiba murder: Accused unable to apply for bail, court hears
Family of murdered UJ student Palesa Madiba frustrated by more delays
Palesa Madiba - Gone but not forgotten
Next on News24
LIVE | Biden blocks SA travel to the US over Covid-19, as international borders tighten