DA interim leader John Steenhuisen has complained in a meeting of the party’s top brass that he is being undermined because he is in the position on a caretaker basis.

This as his detractors claimed that Steenhuisen was pushing for the party’s congress to go ahead in October - albeit virtually - because he wanted to be affirmed as party leader and shake off the interim leader title ahead of the local government elections.

Steenhuisen raised the matter during the the weekend’s federal executive meeting and was one of two people who complained that he was being undermined inside and outside of the party due to not having a firm mandate from DA members, insiders revealed.

"They claim every time one opens a newspaper, Steenhuisen’s legitimacy is questioned. He seems to believe even party members don’t respect him because of the interim label," a senior DA leader, who wanted to remain anonymous, told News24.

The insider claimed Steenhuisen’s embarrassing exchange with an SABC news anchor was briefly brought up, with the interim leader himself complaining of comments which had been made by a "female Gauteng member of the provincial legislature" on social media regarding the matter.

"So, he seems to feel undermined and says his leadership is always being called into question. John says its important to go into the elections with a mandate, having been elected for by the party," said the first source.

This was dismissed by a second insider, who said, while Steenhuisen had remarked about the leadership issues in passing, he did not make any comments about "a small fry" in the legislature.

"I wouldn’t even describe it as a complaint per se, just that during discussions on a virtual conference his input was that sometimes big decisions needed to be taken and it would be unfair to put those to an interim leader," said the second party leader.

"John said this interim leader issue gets thrown in his face sometimes," added the insider.

Steenhuisen is one of three party leaders vying to replace Mmusi Maimane, who stepped down as party leader and relinquished his membership in 2019 following a poor showing at the general elections.

He was elected interim leader by 120 federal council members. The Fedco is the highest decision-making body, outside of the elective congress, in the DA.

The DA had planned to host a policy and elective conference between April and May 2020, however the outbreak of the deadly coronavirus in the country has resulted in large gatherings being prohibited.

The weekend’s FedEx meeting decided to go ahead with the conference in October, using technology to allow party members to vote.

This decision was won against those who proposed it should take place after the local government elections.

They had raised concerns over some being left out of the process due to a lack of access to smart phones, mobile networks and even connectivity to participate remotely in the selection of a leader. 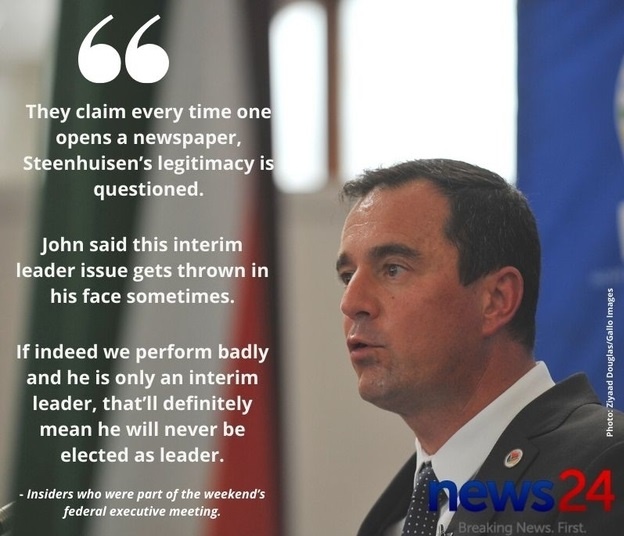 Get rid of 'threats'

A third insider said the push for an October conference, despite concerns that representatives from the most rural parts of the country would be left out, where more to do with Steenhuisen looking out for his future after the 2021 local government polls.

"We already know the numbers are looking good. If indeed we perform badly and he is only an interim leader, that’ll definitely mean he will never be elected as leader," said the source.

This party member argued that Steenhuisen wanted to be leader so he could go after those he saw as "threats", through powers he currently does not hold in his interim capacity.

"He also wants to control lists. John, as a leader, will influence who goes to council, how high up people make it on the party’s lists, and those I assure you are people who would have thrown their weight behind him," they said.

Some of the regulations which were put in place, including the prohibition of large gatherings, have had an adverse impact on the other two, while Steenhuisen is said to have used his role as interim leader to campaign during the crisis.

"He is hosting some chat show on the virus. He can meet with any constituency when he wants to, and the team assisting him are all keen to contest one position or the other. They are literally using this crisis to position themselves," complained the third source.

Steenhuisen has dismissed the claims, insisting the October conference was merely a party position that he respected.

"The party won't go to a local government election without a new 2021 manifesto, which is a policy on its own," said Steenhuisen.

The interim leader also said he was not worried about some being left behind as the party takes an innovative approach to the elections.

"The detailed proposal commissioned by FedEx will hopefully give us all the answers regarding technology. I look forward to engaging it when it gets table before federal council," he said.

We live in a world where facts and fiction get blurred
In times of uncertainty you need journalism you can trust. For only R75 per month, you have access to a world of in-depth analyses, investigative journalism, top opinions and a range of features. Journalism strengthens democracy. Invest in the future today.
Subscribe to News24
Related Links
South Africans react to John Steenhuisen “speaking” for them – and it’s hilarious
DA tanking? That's a figment of people’s imaginations, says John Steenhuisen
The Steenhuisen manifesto: 'Efficient and just land reform process' to top agenda
Next on News24
LIVE | Covid-19 in SA: Death toll at 21 201, with 775 502 confirmed cases

1 person scoops the Daily Lotto prize
Full list of lottery results
Lockdown For
DAYS
HRS
MINS
Voting Booth
When planning for the Black Friday sales do you:
Please select an option Oops! Something went wrong, please try again later.
Save, research and plan ahead, preparing to make the most of it?
7% - 963 votes
Wait and see what looks like a good deal on the day?
14% - 1818 votes
Have no interest in spending more money this year?
78% - 10062 votes
Previous Results
Podcasts
PODCAST | POLITICS UNMUTED: When prophets and politics collide