A pharmacy that services the Mamelodi community - including those who suffer from chronic conditions such as diabetes, HIV, and hypertension - has also fallen victim to the widespread looting.

The Kalapeng pharmacy at Mams Mall has been reduced to an empty shell, with rubbish and liquor bottles strewn across the floor. Everything else is gone. From over-the-counter medication to chronic medications meant to keep people alive.

Mams Mall in Mahube Valley was looted on Monday evening, by thousands of people, according to security guards who witnessed the rampant theft. The pharmacy was not spared. 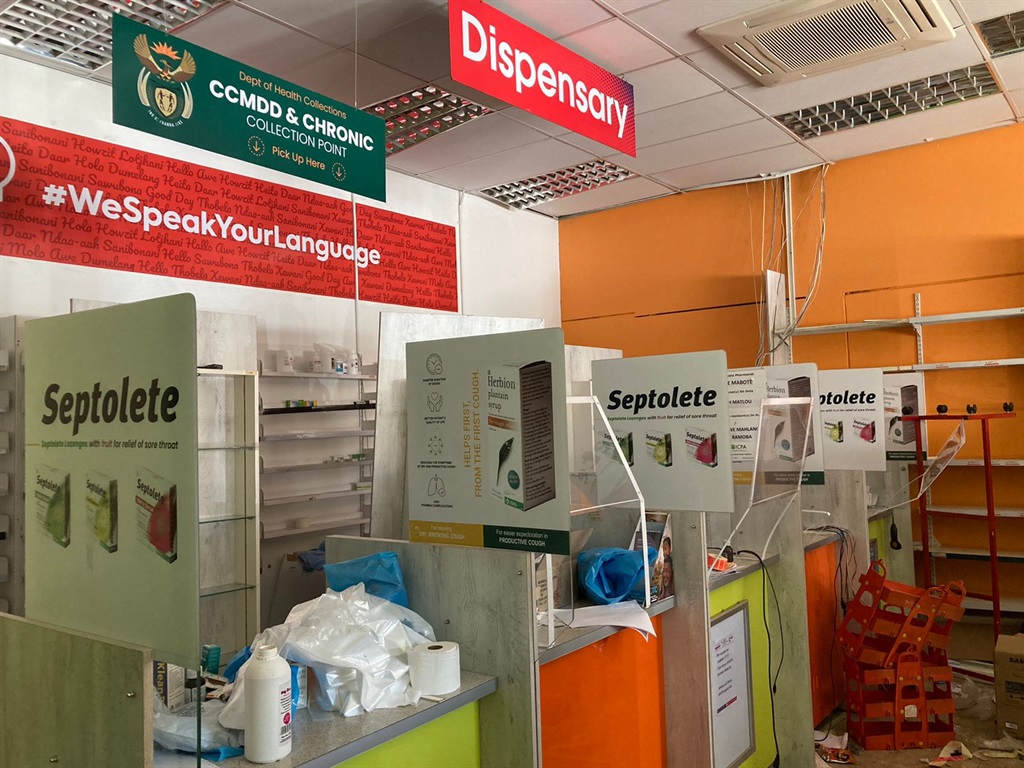 Pharmacy supervisor Frans Ramoba was in a state of disbelief when he arrived at the mall on Tuesday morning.

Upon discovering that the pharmacy had been cleaned out, including computers that kept the scripts, Ramoba immediately thought of the community.

“All the medication, even the chronics [medication was stolen,]” he said.

"People are going to suffer a lot, imagine the chronic people, if they run out of medication, how are they going to survive."

Ramoba explained that insulin for diabetes, ARVs for HIV and other prescription medication had been swiped during the looting.

Looters even made away with the fridge that houses the insulin, he added.

"People’s lives are relying on these medications," he reiterated.

Ramoba feared that because such a large amount of medication was stolen, it could lead to a shortage, as people would have to go to other pharmacies or hospitals for their medication.

He said he was beyond heartbroken, but could not adequately describe how he felt about people looting a pharmacy.

He and other employees also recognised the possibility of them being out of work if the pharmacy was unable to get back on its feet. "My life depends on this pharmacy. I can't get my salary because of the way things are now, so I don’t know.

"I think we are going to lose our jobs," another pharmacy employee said.

READ | Tshwane braces itself for potential spread of looting

The employees could not understand how residents had attacked and looted the same stores that are meant to service them.

"We need to change, we cant just break the shops like this, because tomorrow you will need the things that others have taken."

Earlier on Tuesday, News24 reported that thousands of looters descended onto Mams Mall, outnumbering and overpowering police and private security who watched helplessly as dozens of shops were cleaned out.

The widespread looting and destruction of property that has been witnessed in KwaZulu-Natal, Johannesburg and Ekurhuleni, spilt over into Tshwane on Monday evening.

Mams Mall in Mamelodi was gutted during the evening. By Tuesday morning, the mall resembled a wasteland as shop owners and employees tried to make sense of what had happened.

Several security guards stationed at the mall told News24 that thousands of people had looted the centre.

One security guard, who asked to remain anonymous, said the mall was entirely overrun and that police and private security had been overpowered.

Police were even running away. There was nothing we could do.

News24 observed that multiple shops were looted, including liquor, clothing, cellular and tech stores. Banks and ATMs were also broken into.

Tshwane Mayor Randall Williams said on Tuesday that more than 100 people were arrested in the last 24 hours for public violence, theft, and possession of stolen goods.

"Our law enforcement teams remain on high alert and will continue to monitor high risk areas with the interest of protecting residents, saving property and maintaining law and order," he said.

"I would also like to applaud our communities for standing together against criminality and looting. The vast majority of South Africans are law abiding citizens and we will not be held to ransom by a minority who seek to create disorder."