Several people have been arrested for allegedly disregarding South Africa's lockdown rules that officially kicked in at midnight on Thursday.

SABC News reported that the South African Police Service (SAPS) raided taverns and clubs where people were gathering and drinking in the early hours of Friday morning. A soldier of the South African National Defence Force (SANDF) is seen during a patrol in the Johannesburg CBD. (Michele Spatari / AFP) This week, ahead of the lockdown, Police Minister Bheki Cele warned of consequences for those who attempt to leave their homes, unless for essential purposes, such as buying groceries, seeking medical attention, collecting grants, buying medication, or emergencies.

No store is allowed to sell alcohol or cigarettes during the 21 days and anyone who contravenes the lockdown regulations will be found guilty of a criminal offence and will be fined or jailed for a period not exceeding six months, or both, Cele warned during a media briefing on Wednesday.

Restaurants, clubs, taverns and bars must also be closed during this period. But shortly after the lockdown started, people were still revelling in Johannesburg.

SABC News broadcast footage of a watering hole in Hillbrow that was forced to close its doors after midnight, with several people taken into custody for violating lockdown regulations.

The footage showed the Main Den Pub being closed under police guard and several people being loaded on the back of a police van.

Hundreds of shoppers gathered from as early as 08:30 on Thursday to stock up on liquor at various stores ahead of the lockdown.

READ | Lockdown booze frenzy: Shoppers fill up carts so they don't go off their trolleys

On Wednesday, a KwaZulu-Natal (KZN) man, who tested positive for Covid-19 and continued with business as usual, was arrested and charged with attempted murder. 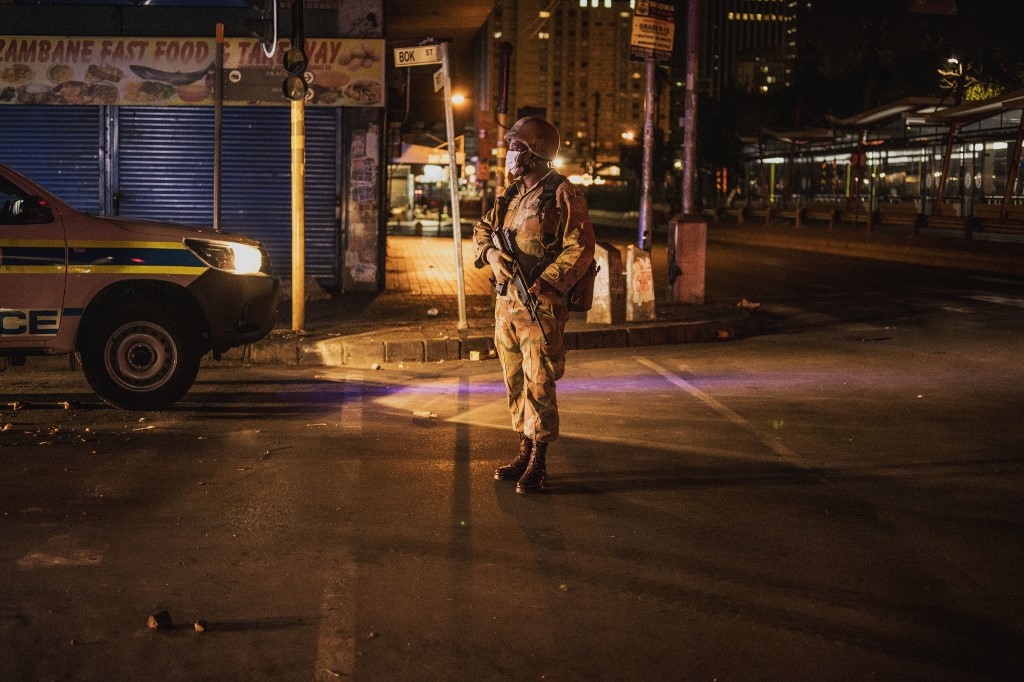 A soldier of the South African National Defence Force (SANDF) is seen during a patrol in the Johannesburg CBD. (Marco Longari, AFP)

KZN Premier Sihle Zikalala said on Tuesday that 19 people in the eThekwini Metro were under investigation for violating measures relating to the national state of disaster Ramaphosa declared.

Most of the 19 allegedly committed the offences at the Durban beachfront, where bathing in the ocean was prohibited because of the virus.

We live in a world where facts and fiction get blurred
In times of uncertainty you need journalism you can trust. For 14 free days, you can have access to a world of in-depth analyses, investigative journalism, top opinions and a range of features. Journalism strengthens democracy. Invest in the future today. Thereafter you will be billed R75 per month. You can cancel anytime and if you cancel within 14 days you won't be billed.
Subscribe to News24
Related Links
WATCH | South Africans go on manic booze run ahead of lockdown
Lockdown booze frenzy: Shoppers fill up carts so they don't go off their trolleys
Day 1 | SA wakes up to a new reality as 21-day lockdown begins
Next on News24
LIVE | Covid-19 in SA: Cases rise by 842

2 bag the Daily Lotto jackpot!
Full list of lottery results
Voting Booth
Are you going to keep wearing a mask following the announcement that it is no longer required under law?
Please select an option Oops! Something went wrong, please try again later.
No ways, I'm done
5% - 6353 votes
Yes, I still want to be cautious
89% - 109643 votes
Only certain circumstances
6% - 7877 votes
Previous Results
Podcasts
PODCAST | The Story: We unpack the Eastern Cape tavern tragedy