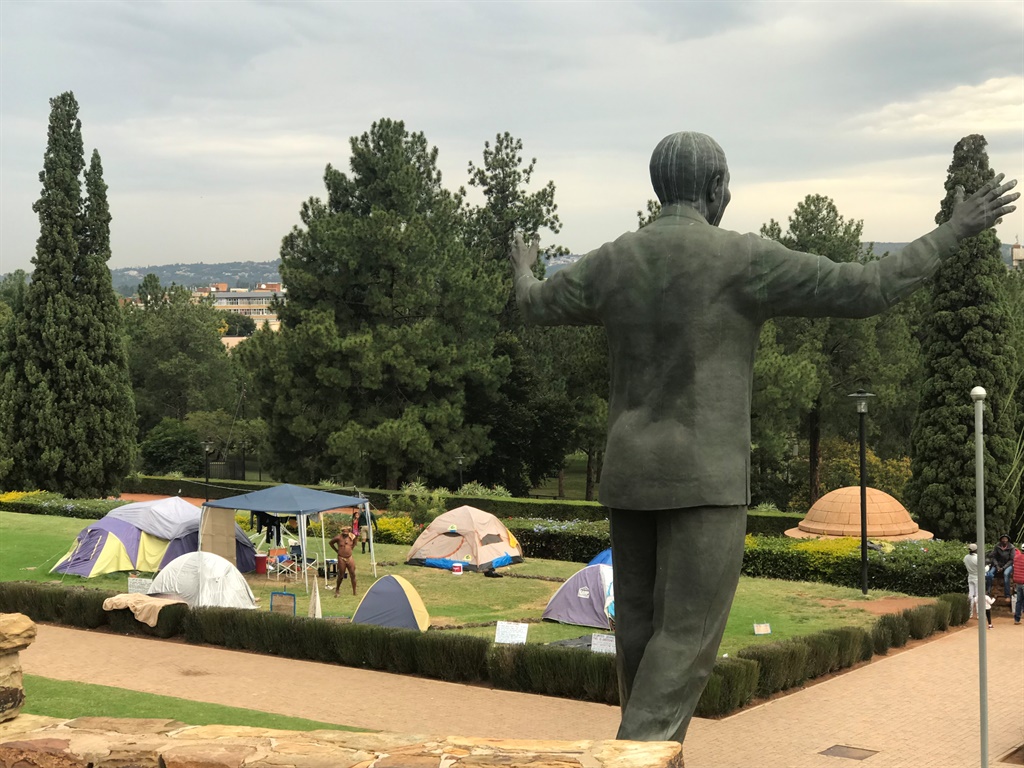 The Khoisan kraal at the Union Buildings in Pretoria with Chief Khoisan SA in the background. (Alex Mitchley, News24)

The group of Khoisan people, who have been protesting outside the Union Buildings in Tshwane, don’t know how they will survive the lockdown.

They spent the last 16 months living off donations by visitors. Under the Nelson Mandela statue, a popular tourist attraction normally abuzz with people visiting the landmark, the protesting group have always managed to get by with the help of others.

On Friday, during day one of the lockdown, the Union Buildings was empty, which is a problem for the group.

The group made the arduous 1 200km trek to the capital city from the Eastern Cape in November 2018 and set up a makeshift kraal, where they have been protesting for Khoisan rights ever since.

They have braved the elements, been present during a national election, and will now face a 21-day lockdown as the country battles to curb the spread of the coronavirus.

Speaking to News24 on Friday, Chief Khoisan SA welcomed the lockdown, saying it was essential to battle this invisible enemy.

However, for the group of seven living outside the Union Buildings in worn tents, the lockdown may also mean starvation.

“Normally, we would have people coming to the Union Buildings supporting us through donations or bringing stuff, but now, during these 21 days, if we don’t die of corona, we will die of hunger,” Chief Khoisan SA said.

Chief Khoisan SA said that police had visited the kraal on Thursday evening, asking that the group move to a shelter during the lockdown.

“We said no, we are not going to any shelter. The president knows that we are here, he simply needs to give us resources to keep us sustained at this time.”

He added that they were not the only people in this position - there were homeless communities across the country who would also suffer as provision had not been made for them.

Not the first time

This wouldn’t be the first time that Chief Khoisan SA has had to battle hunger. In 2017, he and three others made a similar journey to the Union Buildings in an attempt to be recognised.

Things took a dangerous turn when they embarked on a hunger strike that lasted close to a month.

The group's list of demands includes the Khoisan people must be recognised as the first indigenous nation in South Africa; the label "coloured" must be removed from all official papers and be replaced with "Khoisan"; Kwadi–Khoe must be listed as an official language in South Africa; and the Khoisan must be given land and resources to continue their culture and traditions.

We live in a world where facts and fiction get blurred
In times of uncertainty you need journalism you can trust. For 14 free days, you can have access to a world of in-depth analyses, investigative journalism, top opinions and a range of features. Journalism strengthens democracy. Invest in the future today. Thereafter you will be billed R75 per month. You can cancel anytime and if you cancel within 14 days you won't be billed.
Subscribe to News24
Related Links
Ramaphosa signs contentious Traditional and Khoi San Leadership Bill into law
Protesting Khoisan claim they have been told to move to allow grass to grow
Next on News24
LIVE | Covid-19 in SA: Cases rise by 941