A Johannesburg man has called for an audit of the city's firefighting capacity after waiting in vain for the fire brigade, which he eventually had to fetch, as his Porsche and Land Rover went up in flames in his garage in the early hours of Friday morning.

"What if I had trapped people in my building?" Anand Moodliar asked.

The harrowing experience began when their helper, who lives in the granny flat above the garage, phoned him to report that she could smell something burning at 03:40.

Moodliar checked the security cameras of his home in Sandown Ext 24 and saw smoke coming from the direction of the garage.

He ran to investigate and found the garage engulfed in smoke.

He rushed to fetch the fire extinguisher but the flames raged quickly.

He tried to get a hosepipe under the garage door but the flames were too huge by then and held him back. 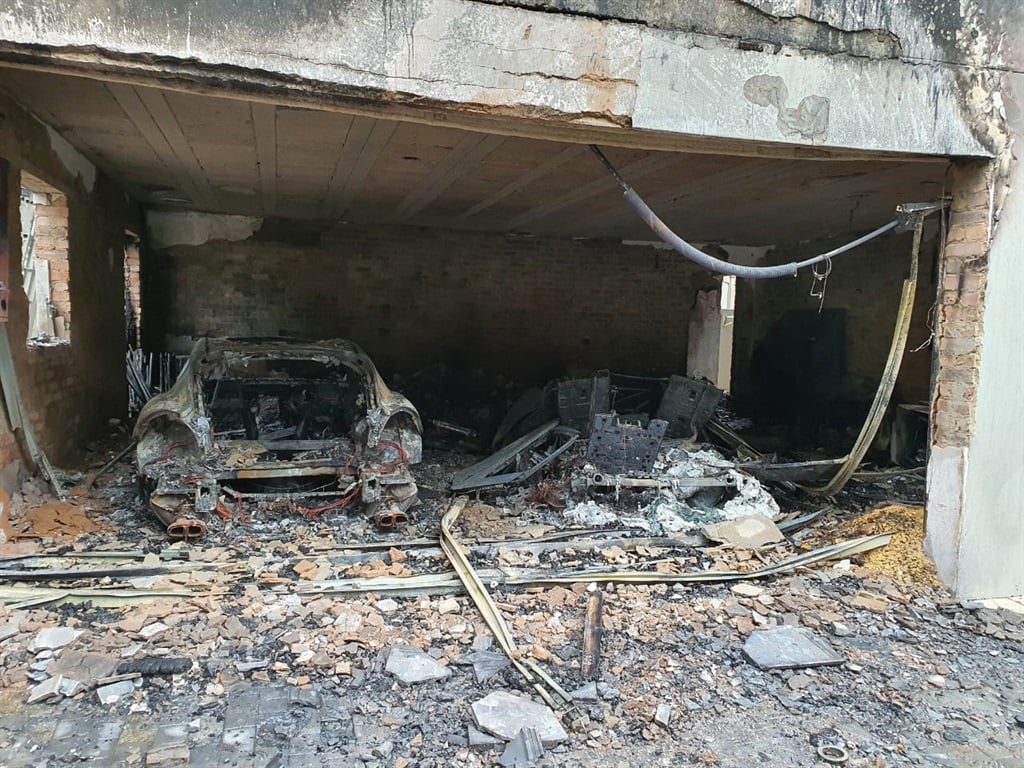 The husk of the Porsche after the fire. (Supplied by Anand Moodliar) The garage burnt out and there was damage to the flat. (Supplied by Anand Moodliar) At 03:48, they called the emergency services but he and other family members were worried when they could not hear sirens approaching.

"It was still curfew, and it was dead quiet, and we couldn't hear any sirens coming or anything," he said.

Then he remembered that the Grayston Drive fire station is less than 2km away and rushed off to call them.

"The guard told me it was closed!" a flabbergasted Moodliar said.

He then remembered seeing a fire station in Alexandra when he once took a staff member home.

He arrived at that fire station at 04:08 and banged on the door, telling them of his emergency.

The firefighters sprang into action and were ready to go within about six minutes. They had not been informed of the fire, Moodliar said.

They got to his home at 04:28 and the fire was contained.

However, the Porsche and Land Rover were reduced to husks.

Black marks were visible where the flames had licked the walls.

He was relieved that neither his family nor staff living on the property and their family were injured.

However, he wanted to raise the alarm over the circuitous route he had to take to get help and warned that this did not bode well for handling fire emergencies where lives are at stake.

"What if it was the Standard Bank building?" he asked.

"How do we bring more attention to this travesty?" Moodliar asked.

Synock Matobako, spokesperson of the Johannesburg Emergency Services, told News24 an investigation will be launched into why a security guard told Moodliar the fire station was closed. He added that it is not normal procedure for security personnel to respond to the public.

Matobako said the Sandton fire station was open but did not have any fire engines on site.

"It's a well-known fact that the City of Johannesburg does not have enough fire engines to service the city. We are in the process of procuring more fire engines but this process is taking longer than expected. There are, however, specialised vehicles which are available to assist in firefighting," he said.

The lack of fire engines should not have posed a problem, as the standard procedure for a fire station without any fire engines is to contact the nearest fire station that has vehicles and dispatch them to the scene.

"What should have happened is that the person should have gone into the fire station and then the staff would have contacted Alex [fire station], and Alex will respond," he said.

We live in a world where facts and fiction get blurred
In times of uncertainty you need journalism you can trust. For only R75 per month, you have access to a world of in-depth analyses, investigative journalism, top opinions and a range of features. Journalism strengthens democracy. Invest in the future today.
Subscribe to News24
Related Links
PICS | Firefighters battle blaze on slopes of Table Mountain
PICS | Petrol tanker catches fire following crash in Ekurhuleni
PICS | 139 left homeless in Cape Town shack fire
Next on News24
LIVE | Covid-19 in SA: Death toll tops 41 000 as cases hit 1 417 537