WATCH | 'People around me have been dying. When will I die?' - 128-year-old North West woman

On Wednesday, one of South Africa's oldest people – Johanna Mazibuko – will be celebrating her 128th birthday.

Mazibuko lives in Jouberton in Klerksdorp, North West, and was born on a maize farm in the Ottosdal area.

She was the first of 12 children; only three are still alive.

Though she managed to reach the advanced age of 128, Mazibuko and her siblings never learnt to read or write due to the fact that they were born on farms and never got an opportunity to get an education.

"I was born on a farm. We lived so well on the farms. There were no problems." Due to her advanced age, Mazibuko does not remember much of her childhood. What she remembers, though, is the time when there was an infestation of locusts on the farms.

She, however, says not all of it was disruptive to the maize crops.

"There were ones we could catch and eat. It was like you are eating meat. We would just fry them and eat them like that, just on their own."

During her interview with News24, Mazibuko was sipping on her favourite "modern" drink – Coca Cola – but said she grew up on a totally different diet, which was devoid of soft drinks and fast food.

Growing up, she said, her diet consisted of fresh milk and wild spinach.

"I was married to an older man. His first wife had died. He was an independent man. He had a horse carriage and cows. I would milk the cows and make butter to sell. That man treated me very well and made me forget about my life before him. I did not want for anything." Mazibuko used to work in a farm where she harvested milk and also sold butter.
News24 Alfonso Nqunjana

The couple had seven children - only two are still alive.

Just like their mother, Mazibuko's children never went to school because she raised them on the farm.

After getting married, she worked as a domestic worker for farm owners.

"I ironed and cleaned; the people were kind. That is the life I want to go back to. I don't know why I came to Jouberton because life is hard here.

"When you don't have money, you suffer. On the farms, we lived off the things we farmed. We would get rations as well. At the end of the year, we would get sacks of maize and we would go and sell them and make money. If I was not old, I would go back to the farms."

She doesn't remember what year her husband died – and says she moved to Jouberton from Ottosdal with her son, Tseko, just as apartheid was beginning. Johanna Mazibuko is one of the oldest people in South Africa and will be celebrating her 128th birthday.
SuppliedSupplied.

"At that time, when you left the farms for the townships, you had to bring a permit to show that you are from there. I came with my son and lived here."

Her sister, Elisa Baaitsane Wesinyana, 75, says that, when she was born, Mazibuko was already married. Mazibuko says an event she will never forget is voting in the first democratic elections in 1994.

"Mandela was my person. He allowed us to control ourselves. He got us houses and made the government give us pensions."

'My body is stiff'

For someone her age, Mazibuko is still very strong.

She has her eyesight, but is a bit hard of hearing and also uses a walker to get around the house. Her only complaint, she says, is that her body is stiff.

"My body is stiff. When I walk, I walk like a child. When people are walking up and down the streets, I just watch through my window and wish I could be like them. When MmaLerato is not around, I am able to go to the bathroom alone. I am able to bath...  she always tells me she doesn't want me to smell." Mazibuko finds it very challenging to walk because she experiences pain in her knees whenever she stands up.
News24 Alfonso Nqunjana

"She takes care of me so well. I have no complaints. No one can take care of me like MmaLerato. No one else has the patience for me," Mazibuko says of her caretaker.

She laments that, despite having a big family, none of her grandchildren take care of her.

"They complain that I am strict, but that is not true. I just want the truth and to be able to say when I see that people are doing wrong things."

According to MmaLerato, through the two old women, she managed to find the love of a mother she had been yearning for. Her own mother died 25 years ago. MmaLerato and her family moved out of their home in 2001 and moved in with Mazibuko, whom she affectionately calls Ouma, so they could care for her.

She always anticipates all of Mazibuko's needs and ensures she is comfortable at all times.

MmaLerato grew up in Bothaville, Free State, and occasionally visits her family. However, she is so attached to the old woman she takes care of that she finds it hard to be away from her for extended periods.

"I can't sleep when I am not next to her. When I come back, she will also say she couldn't sleep. She says she just sits by the window looking at the gate and wondering when I will be back. She also saved me... if it was not because of her, where would I be?" asked MmaLerato.

To celebrate Mazibuko's birthday, the Matlosana municipality is arranging a party.

The mayor, James Tsolela, said last year they bought Mazibuko a bed. This year, they are getting her a sofa.

"We have been checking and doing research to see who is the oldest. We can't find anyone her age. We do have her ID saying that. We have to try and put her in the book of Guinness Book of Records, so she can be properly honoured."

The person dubbed the world's oldest by Guinness, Kane Tanaka of Japan, 116, died this year.

Mazibuko says she doesn't know why she has lived a long life.

I am amazed at why I am still here after so many years. Why am I still here? People around me have been dying. When will I die? What's the point of being alive? The world has tired me because I am just sitting here doing nothing. 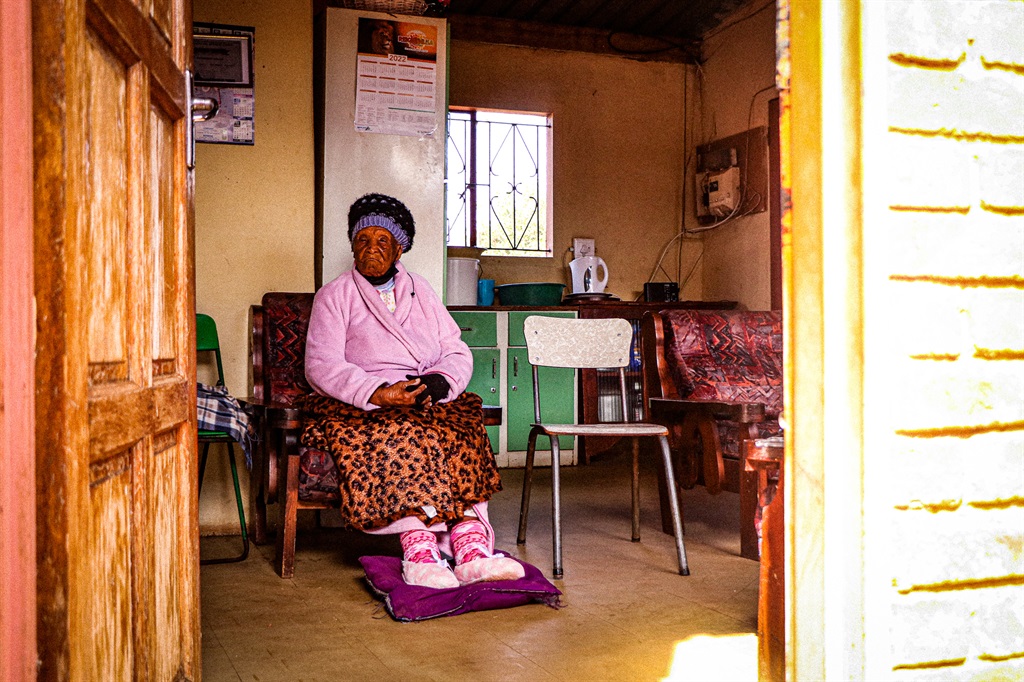 Johanna Mazibuko said she is ready to die because people around her have been dying.
News24 Alfonso Nqunjana

As she prepares for her death, she has given MmaLerato strict instructions on how to bury her.

"When I die, they must slaughter a cow for me. They must bury me well, so that I never bother them." For someone her age, Mazibuko can still crack a joke.
News24 Alfonso Nqunjana

"If it's possible, I will. Even when I rest, I will keep checking up on you, because you have taken care of me so well," she promises.