'We have lost a fighter' - Rivonia trialist Andrew Mlangeni 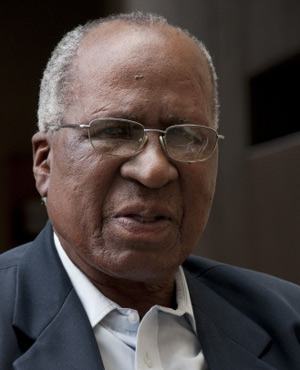 South Africans must continue the fight for freedom and equality, following the death of Winnie Madikizela-Mandela, says Andrew Mlangeni, one of the two last surviving Rivonia trialists.

Mlangeni told News24 that he was saddened by the news of Madikizela-Mandela's death. The struggle icon passed away on Monday at Milpark Hospital in Johannesburg.

"We have indeed lost a fighter, a brave woman who fought the struggle against the apartheid regime under very difficult conditions," said Mlangeni.

He recalled the period when apartheid police banished Madikizela-Mandela to Brandfort in the Free State. He said the oppressive regime had believed that people would forget about her and the need to fight for a just country.

"The people disappointed them, because we didn't forget about her.

"She was very brave, she didn't fear anything, a very committed person to both the ANC and the ANC Women's League," continued the Rivonia trialist, who spent time on Robben Island for his efforts to see a democratic South Africa.

"We have lost a fighter," reiterated Mlangeni.

"I hope some of us, who are still alive, will take over in the struggle for freedom, equality and the dignity of everybody… those are the qualities she stood for."

We live in a world where facts and fiction get blurred
In times of uncertainty you need journalism you can trust. For only R75 per month, you have access to a world of in-depth analyses, investigative journalism, top opinions and a range of features. Journalism strengthens democracy. Invest in the future today.
Subscribe to News24
Related Links
South Africans mourn the passing of Mother of the Nation
Winnie Madikizela-Mandela has died
Mlangeni: My heart bleeds
Next on News24
LIVE | SA records 1 559 960 Covid-19 cases and 53 423 deaths