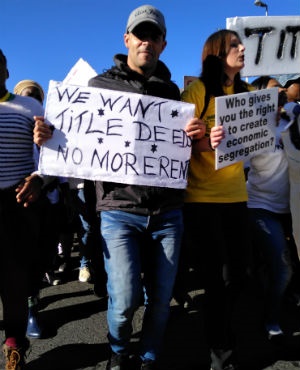 A march to Communicare head office and provincial legislature on Wednesday over social housing, evictions and land. (Jenna Etheridge, News24)

Mandla Apleni and his family have been renting a free-standing home in Brooklyn, Cape Town for 10 years but he says he and many others need title deeds because they can't afford to pay rent forever.

Apleni, 46, and others renting through housing company Communicare, joined backyarders and those in informal settlements on Wednesday in a march over evictions, land and housing opportunities in Cape Town.

Some in the group claimed Communicare was carrying out "illegal and unlawful mass evictions" across its portfolio of social rentals, which was aimed at families earning monthly incomes below R15 000.

Apleni, a driver, who lives with his wife and three minor children, said: "I am supposed to be paying R4 000 but I earn R3 100 a month. When I started to live in Communicare, I was paying R1 200. Where am I going to get that money?

"We have people paying [rent] for 44 years. I have been paying for 10 years. We need a title deed because we can't pay forever."

He said the company had kicked people out and circulated a letter offering a small cash incentive to people who vacated their homes.

"How can you [call yourself] Communicare, but you compete with market-related [rentals?]."

'Pensions are going straight to rent'

Another woman who lived in a Communicare unit and who only want to be identified as Ms Arendse, said she was most worried about seniors who lived in cottages.

"How do our seniors survive because their pensions are going straight to rent. They work their whole lives. Why are we exploiting our pensioners?"

Communicare spokesperson Michelle Matthee told News24 that the company was not engaged in mass evictions.

"We have thousands of tenants with rental agreements in place, which they honour.  Our lease provides for tenants to be served notice under certain circumstances, which includes when they are in breach of their lease agreements. A breach could be caused by a number of things such as breaking the house rules or growing arrears in payments."

She said the company engaged with tenants to remedy the situation before notice was given and to understand why rent was not being paid.

"Our tenants can apply for temporary financial relief for three months if the problem is of a short-term nature.  Sometimes this even extends to six months. Sometimes we are also able to offer tenants accommodation in a cheaper unit, if one is available. However, if a tenant absolutely cannot pay their rental, we do have to serve notice."

She said the company usually applied for eviction orders in court if people did not vacate units after notice was given.

"We have offered small cash incentives to tenants who chose to give notice at the end of June. It was entirely voluntary, and no one was forced to take it."

Communicare did not have any rent-to-buy programmes but sold new houses in Mandalay and Kuilsriver.

She reiterated that they had a variety of rental units at different prices, which started at R700 a month.

"The cost of running and building such housing is quite high and we do not receive any operating grants from any government or other agencies.  Since we have to fund this housing ourselves, we also rent units to people of all incomes."

She said this cross-subsiding allowed them to develop more housing and offer some units at rates 30 and 80% less than normal market prices.

"We are unaware of mismanagement at Communicare but encourage anyone with evidence to come forward so that we can investigate. People can report anonymously on our Freecall Line 0800 204 969 or by emailing communicare@tip-offs.com."

We live in a world where facts and fiction get blurred
In times of uncertainty you need journalism you can trust. For only R75 per month, you have access to a world of in-depth analyses, investigative journalism, top opinions and a range of features. Journalism strengthens democracy. Invest in the future today.
Subscribe to News24
Related Links
'Land invasion' turns out to be peaceful housing protest - law enforcement
Cape Town's Scottsdene 'burns' after protesters lose housing eviction challenge
Next on News24
LIVE | Covid-19 in SA: Death toll rises by 248 as total cases hit 2 435 036

Lekker Friday for two Daily Lotto winners!
Full list of lottery results
Lockdown For
DAYS
HRS
MINS
Voting Booth
Should Covid-19 vaccinations be mandatory for employees in workplaces?
Please select an option Oops! Something went wrong, please try again later.
Yes, it is the responsible thing to do
46% - 3881 votes
No, vaccination should be an individual choice
43% - 3647 votes
No, but those who are unvaccinated should have to work from home
11% - 899 votes
Previous Results
Podcasts
PODCAST | The Story: Surviving Covid-19 and unrest: - will our economy ever recover?