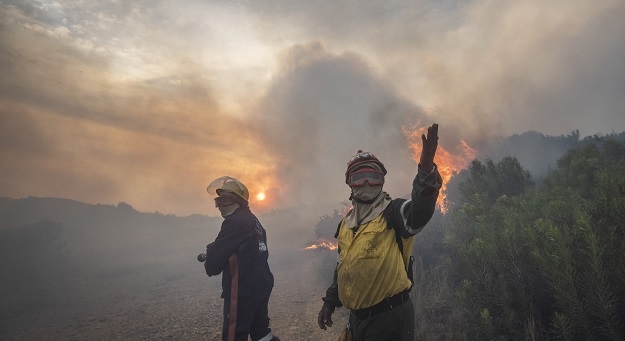 Fire Fighters in Cape Town remain on high alert on Monday evening as fears of possible flare-ups of the devastating wildfire grow.

The Table Mountain National Park (TMNP) said firefighters will be on standby throughout the night in case of any eventuality.

"We would like to clarify that the fire is contained, but we are not out of the woods yet. We are dealing with severe winds that could ignite the flames. That’s why our crews must stand by for anything," TMNP fire manager Philip Prins said.

Prins stressed that it does not look like the fire will be extinguished immediately. "It will take some time. We are hoping to extinguish the fire by the end of the week," he added.

By late Monday afternoon the City of Cape Town reported that it was monitoring flare-ups along Philip Kgosana Drive and Tafelberg Drive, this as the fire was heading towards Bluegum Forest.

#CapeTownFire this is the extent of the damage inside the UCT library. Firefighters are still trying to extinguish the fire to prevent any flare ups. @News24 @TeamNews24 pic.twitter.com/SlmPrC2dcu

The university said the risk assessment of the damage caused by the blaze was already underway.

"It was not an easy task to evacuate the 4 000 students from the residences. We did think that by Wednesday, all campus activity will be able to continue, but at this stage, it is not possible,” Phakeng said.

Winde said it was devastating to hear of the loss of major heritage sites including UCT’s African studies library, Rhodes Memorial Park’s restaurant, and Mostert’s Mill, along with vast tracts of land.

"Through the Western Cape government and City of Cape Town’s coordinated response, we have been able to salvage large parts of the mountain and University,” he added.

Meanwhile, a thick dark cloud of smoke continues to hang over the Mother City, causing concern for authorities.

The City’s Air Quality Monitoring Unit said it had recorded very high levels of particulate at its Foreshore Monitoring Station.

The City advised residents with asthma and other sensitive respiratory conditions to stay indoors and keep windows and doors closed.

Lucky Sunday for 3 Daily Lotto players
Full list of lottery results
Lockdown For
DAYS
HRS
MINS
Voting Booth
Children between 12 and 17 can now be vaccinated against Covid-19. As a parent I am:
Please select an option Oops! Something went wrong, please try again later.
Relieved, it's been a long wait to this point
51% - 125 votes
A bit hesitant, and will wait to see how it goes
25% - 61 votes
Completely against my child getting the shot
23% - 57 votes
Previous Results
Podcasts
PODCAST | Ballot Box: Why Facebook is not doing enough against election misinformation