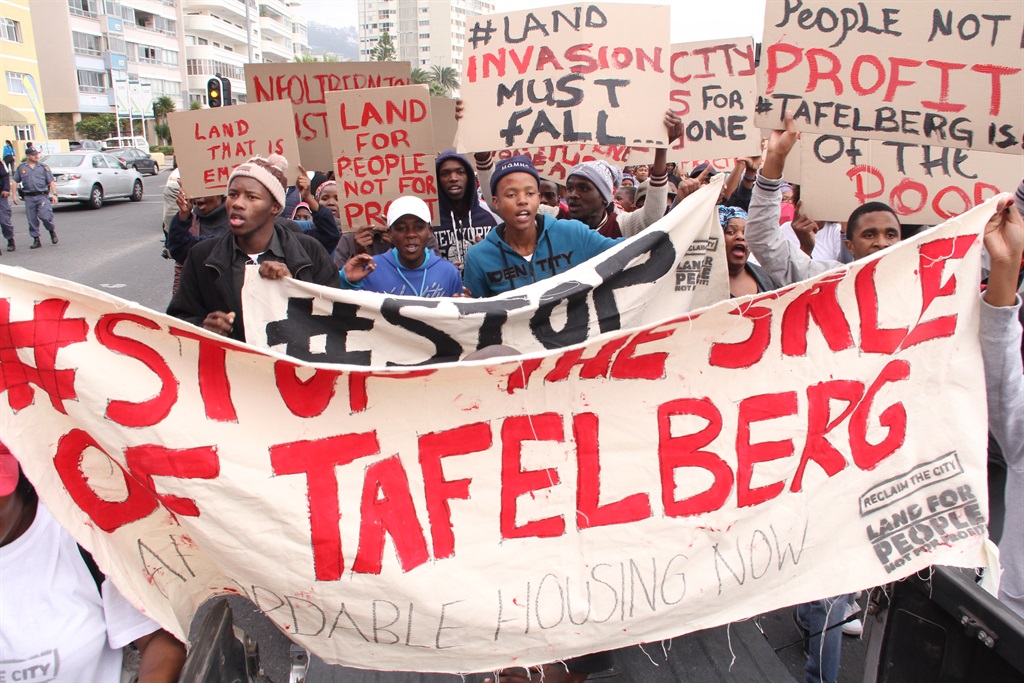 The Reclaim the City pressure group is one of the groups demanding that the Table Mountain school grounds in Sea Point not be sold and be developed for social housing. Photo: Daneel Knoetze

The Western Cape High Court has dismissed the Western Cape government's application for leave to appeal its decision to set aside the sale of the controversial Tafelberg property in Sea Point.

But the court has granted both the provincial government and the City of Cape Town leave to appeal to the Supreme Court of Appeal against specific orders made in the initial judgment, delivered last year August.

"We remain concerned that, rather than addressing core issues at hand, the province now seeks to take steps to litigate and protract further delays occasioned by its constitutional delinquency," Judges Patrick Gamble and Monde Samela said on Friday.

In an initial order made in August last year, Judges Gamble and Samela found that the provincial government and the City had a constitutional and legislative duty to address spatial apartheid planning by providing affordable housing in central Cape Town.

It also declared the Western Cape Land and Administration Act (WCLAA) unconstitutional, and said it did not give the public a meaningful opportunity to participate in a decision about state land.

The court ordered both the provincial government and the City to develop a plan to do this by 31 May 2021.

The latest ruling gives the province the go-ahead to approach the Supreme Court of Appeal to challenge certain aspects of the order made in August last year.

The Western Cape government took the court's decision on appeal last year because the judgment amounted to "judicial overreach".

A ruling last year found the City and province had failed in their constitutional mandate to address apartheid spatial planning by selling the Tafelberg site in Sea Point to the Phyllis Jowell Jewish Day School for R135 million. The property has been returned to the provincial government.

The province said the court's findings in this regard impact's the Western Cape government's core functions going forward, including the right of its executive to determine how and where its budget is allocated.

The province said the findings would also impact its right to determine how to dispose of assets and its right to operate within a participative democracy.

The City of Cape Town said the court erred in conflating the obligations of the province and the City, and in doing so, found the City had failed to comply with its obligations under the Housing Act and Social Housing Act.

Housing law group Ndifuna Ukwazi has been spearheading a campaign to compel both spheres of government to build affordable housing. They opposed the application for leave of appeal.

*Correction: In the original version of this article the headline included the City of Cape Town. The city was not part of the court  case. The article has been changed to reflect this.

Do you want to know more about this topic? Sign up for one of News24's 33 newsletters to receive the information you want in your inbox. Special newsletters are available to subscribers.
We live in a world where facts and fiction get blurred
In times of uncertainty you need journalism you can trust. For 14 free days, you can have access to a world of in-depth analyses, investigative journalism, top opinions and a range of features. Journalism strengthens democracy. Invest in the future today. Thereafter you will be billed R75 per month. You can cancel anytime and if you cancel within 14 days you won't be billed.
Subscribe to News24
Next on News24
BREAKING NEWS LIVE | Case of Brian Molefe, Siyabonga Gama and others postponed to April next year