Heavy rainfall flooded parts of the Western Cape last week, with many residents scrambling to clean up the damage it caused.

Kulekani Ngiba, 27, said he woke up early on Thursday morning to the sound of his electricity switching off.

Upon getting out of bed he discovered the entire house was flooded.

"The sight was shocking. I was more concerned about being electrocuted since the height of water covered all the plugs inside the house," he added.

Heavy rainfalls flooded parts of the Western Cape last week, with many residents scrambling to clean up the damages the rain caused.
Photo Supplied

According to Ngiba, it took about five hours for the water subside clean up.

Luckily, when the power was restored on Thursday afternoon, the plugs were not damaged, he added.

Mogammad Yaseen Sasman, 35, has been living in Schaapkral all his life and experienced one of the worst flooding inside his home recently.

"Wednesday evening just after 9pm, my wife frantically called me to come and see the extent of the water that was flowing into our home. I was in shock, " he told News24.

According to Sasman, his entire house was flooded to the point where he had to think fast and put bricks under the beds to avoid water damage.

"The water level was just below my knees, I had to send my wife and three kids to a friend's house as there was no way they could be inside the property whilst the water piled up." Beds have been put on bricks to prevent the water from damaging the base of the beds.
Photo Supplied

He said a friend assisted him in trying to clear up the water inside the property, which lasted right into Thursday afternoon.

"I contacted the City of Cape Town on numerous occasions and was sent from pillar to post, with no sympathy or urgency coming from the call operators."

Sasman claimed he took it upon himself to do an online search for a number to report the flooding, eventually, he got hold of someone from the council who advised him he would come out to assess the complaint by Friday or Saturday, however, he only showed up on Sunday afternoon.

"On Saturday morning around 6:20, heavy showers of rain flooded my home yet again," he said. 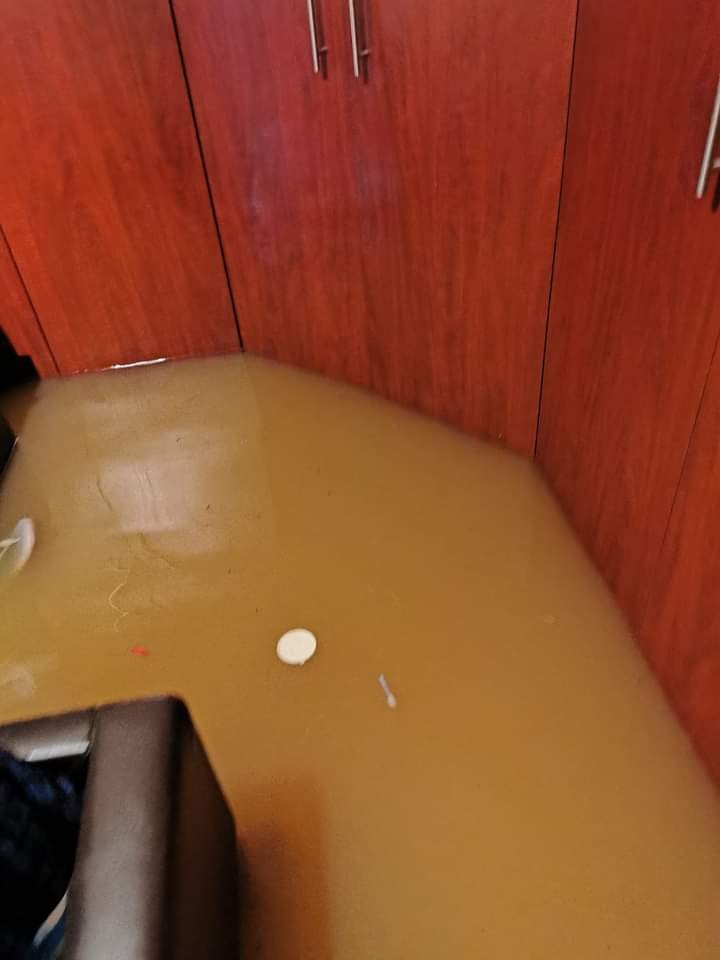 The father of three added he took it upon himself to see if there was a blockage somewhere on the property that was causing the heavy flooding.

He then discovered a broken storm drainage pipe which was causing all the water to run onto his property.

"What infuriates me most is that I lodged a complaint with the City since Thursday, they haven't bothered to keep me updated with the processes they will be following, I've had to contact them several times to follow up on my complaint," Sasman said.

City spokesperson Luthando Tyhalibongo confirmed that a call was registered on 1 July.

According to the City, upon investigation, it was determined the main cause was a blockage in the storm water system.

"Due to the high intensity of rainfall during last week, numerous complaints of localised flooding were reported. The depot has been working through these service requests as quickly as possible, however, it was unable to get to all the reported cases last week," Tyhalibongo said.

"A City Roads Infrastructure and Management team was dispatched on Tuesday morning to the Schaapkral property to unblock the system downstream."

The City added the storm water system would be unblocked during the week.

Domonique Parker, 39, who resides in Kraaifontein, has been working from home during the pandemic, and said when he woke up last Thursday his kitchen and lounge area were flooded. Houses have been flooded recently due to the floods in the WC.
Photo Supplied

"It was an overwhelming sight to see as my kitchen, cupboards, TV unit base, amongst other things, was damaged by the water. It took me the entire day to sweep the water out of my house, but the more I kept sweeping the water out, the more it kept coming in as the drains were blocked."

According to him, he was extremely grateful that none of his work electronics was destroyed during the storm.

Khayelitsha commuter Sakumzi Nyamza, 30, said the effects of the flooding last week were so bad that he had to use an alternative route to get to work.

In a statement, the City said teams have conducted more than 200 on-site assessments thus far of flood-affected dwellings in informal settlements after the heavy rainfall. According to the City of Cape Town, many of the flooding hotspots are in the Mfuleni, Kraaifontein, Dunoon, and Khayelitsha areas,” the city added.
Supplied Supplied

"City teams have also provided more than 2 000 flooding assistance packets and other support where it is possible to do so. Many of the flooding hot spots are in the Mfuleni, Kraaifontein, Dunoon, and Khayelitsha areas," it added.

According to the City's mayoral committee member for safety and security, JP Smith, various departments continued to do their utmost to help residents and they would remain on the ground seven days a week.

"City officials continue to help with the digging of trenches and by constructing canals to lead floodwater away from affected areas where possible and monitoring high-risk priority areas daily to determine flooding risks and occurrences, while giving advice to residents on how to reduce risks," he added.

Do you want to know more about this topic? Sign up for one of News24's 33 newsletters to receive the information you want in your inbox. Special newsletters are available to subscribers.
We live in a world where facts and fiction get blurred
In times of uncertainty you need journalism you can trust. For only R75 per month, you have access to a world of in-depth analyses, investigative journalism, top opinions and a range of features. Journalism strengthens democracy. Invest in the future today.
Subscribe to News24
Next on News24
LIVE | Covid-19 in SA: 81 new deaths as cases hit 2 918 366

Lucky Sunday for 3 Daily Lotto players
Full list of lottery results
Lockdown For
DAYS
HRS
MINS
Voting Booth
Children between 12 and 17 can now be vaccinated against Covid-19. As a parent I am:
Please select an option Oops! Something went wrong, please try again later.
Relieved, it's been a long wait to this point
50% - 1754 votes
A bit hesitant, and will wait to see how it goes
22% - 772 votes
Completely against my child getting the shot
28% - 971 votes
Previous Results
Podcasts
PODCAST | My Only Story: Fiddling, sex jokes and flirting – another water polo coach exposed