Tension is brewing in Sea Point, on Cape Town's Atlantic Seaboard, as conflict among the homeless, those trying to assist them, and ratepayers continues to escalate.

Homeless people complain they are being treated as outcasts by the community at large, while ratepayers are lobbying authorities, arguing the homeless should be removed.

Residents have been at each other's throats, especially those trying to assist people living on the streets.

The issue reached boiling point this weekend when media reports surfaced about an influential group of residents, who are allegedly threatening those extending a helping hand to the homeless in the area.

A newspaper article claimed three well-known businessmen were the centre of the intimidation tactics.

Those assisting the homeless are allegedly targeted and bullied on social media - and some are even being confronted by the group of influential businessmen.

The dispute started after a pamphlet was circulated on social media, on the Facebook group Atlantic Action Group, which shows homeless people in a bad light.

Residents made an online petition under the banner "Save Cape Town". They also urged others to join the court litigation in which the advocacy group, Ndifuna Ukwazi, is challenging the City of Cape Town's by-laws. 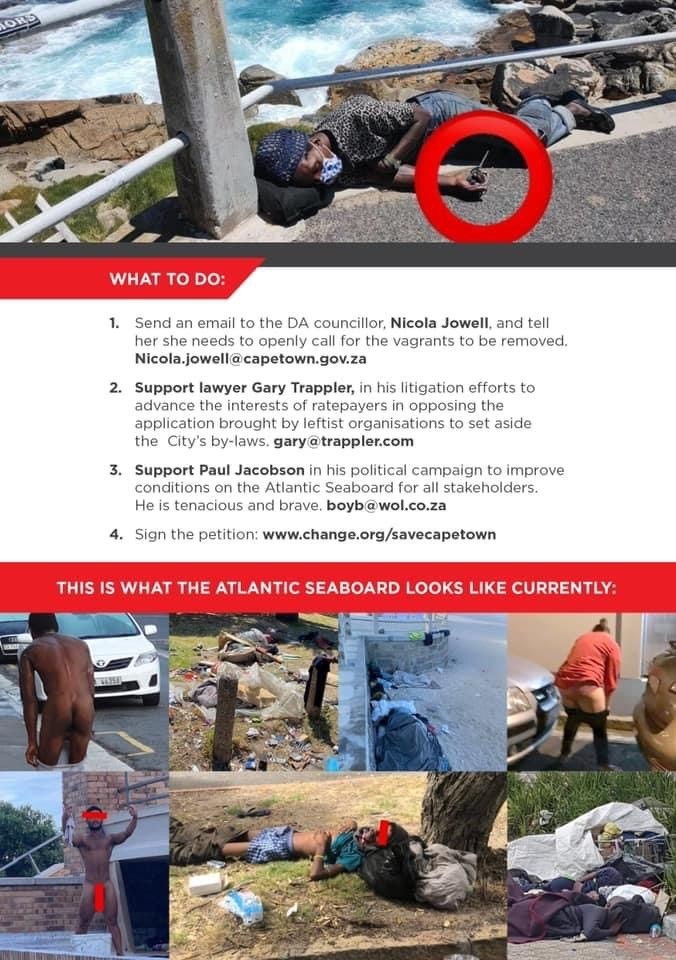 Ward councillor Nicola Jowell told News24 the issue regarding the Atlantic Seaboard was not about service delivery, or the demands of the homeless being removed from the area, but rather a deliberate agenda of shutting down free speech and using the courts to undermine women in the community.

Jowell said:
Constant threats and legal tactics are being used to silence them. Nobody is or has ever disputed the valid concerns and complaints from the community with regards to the extent of concerns regarding the homeless in the area. But the current issue is the grouping of apparently 'influential businessmen', who are targeting women in the area, calling them unspeakable names, taking them to court, and crucially, now, bullying the media into not speaking out on the issue.

"What is happening here now is that people, who already feel vulnerable, are being further marginalised by some, in and outside of the community, who see their business and financial standing in society as unshakeable foundations of moral superiority," she added.

Businessman Paul Jacobson and lawyer Gary Trappler are among those named as allegedly being part of the group targeting locals.

Trappler told News24 Jowell's claim of "a group of white men using the courts to silence their critics" was untrue and not honest.

"I have indicated that, on the facts, quite the opposite is the case. There is no evidence to support this supposition, as Ms Jowell claims. Her claims are as outrageous as they are false.

"I know of and read posts and letters from hundreds of women who find the state of the Atlantic  Seaboard utterly deplorable and unsafe. They ascribe this to the growing unresolved homeless problem. Ms Jowell has weaponised the word misogyny, and it is juvenile and unfounded, and rejected out of hand," he said.

Jacobson dismissed all allegations against him, blaming Jowell for her statements.

"Councillor Jowell's position, as a DA ward councillor, is seriously under threat because of a lack of service delivery. Her accusations are disgraceful, out of line, carries no evidence whatsoever, is inflammatory, derogatory and a complete and utter lie."

The co-ordinator of NPO Souper Troopers, Caryn Gootkin, said she had an interim protection order against Trappler, the terms of which prevented him from harassing or intimidating her.

Trappler said, in response to Gootkin: "Souper Troopers instituted High Court proceedings against myself and Jacobson, attempting to silence us - and, for lack of legal merit, they were forced to withdraw their application."

News24 has seen the court order in the case Trappler refers to and it shows Souper Troopers only withdrew the application because both Trappler and Jacobson removed the offending social media posts and not because it had no merit.

Haven Night Shelter chief executive Hassan Khan said: "This story seems designed to shut down objections to the establishment of settlements on pavements. Families have a right to insist on good neighbourliness from all in the community, including the homeless; and to object to being deprived of public spaces arbitrarily."

Last year, the car of Sea Point Good Samaritan Peter Wagenaar was set alight. He had ignored opposition from some residents to feed homeless people during the national lockdown.