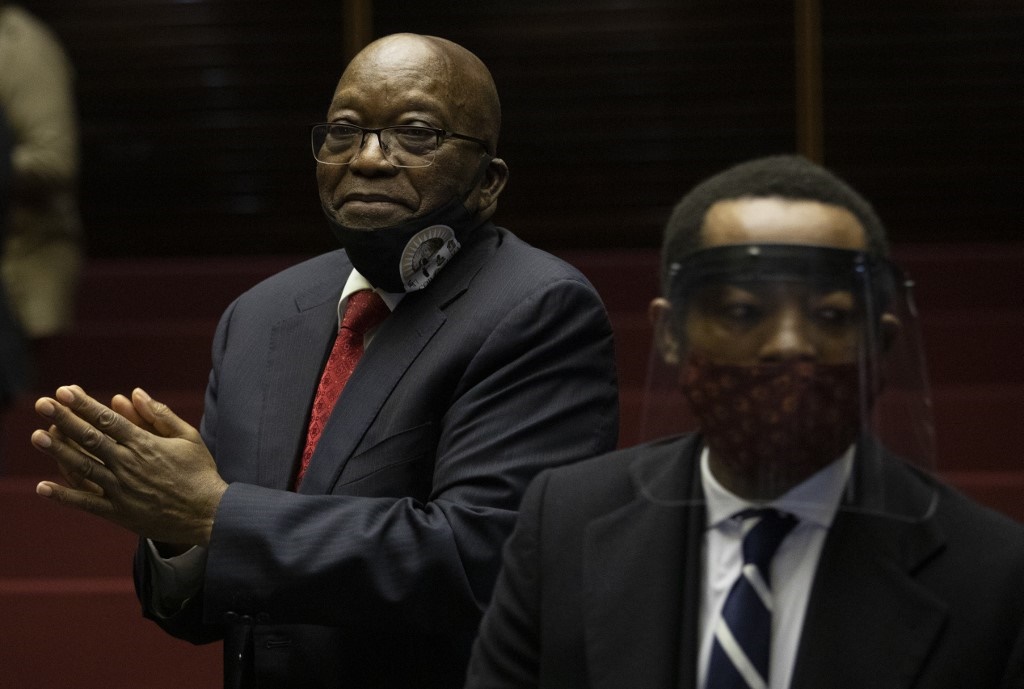 This was revealed in the KwaZulu-Natal High Coirt in Pietermaritzburg on Tuesday when the matter for the company and Zuma was heard before Judge Kate Pillay.

Representing Thales, advocate Barry Roux made the declaration as dates for their postponement was discussed.

"We have the responsibility to put certain aspects before you. That is a mention of a racketeering application. It says we would issue that before 7 July. We will issue it long before then. It is 99% ready."

While not going into details, he said it dealt with charges related to racketeering.

"It deals with the specific part of the indictment on racketeering and whether it was competently instituted."

Pillay questioned if it had not been resolved already.

To this Roux replied: "We are pretty confident we will do it in the course of this month."

Zuma supporters singing a song that was made famous during the former presidents state capture scandal which became an anthem at the Nasrec conference #Zumatrial @TeamNews24 pic.twitter.com/eBlvNJW4nY

The review application could further delay the much-anticipated court matter that has hung in the air for 15 years.

The court also adjourned the corruption trial to September 8 so that documents between the various parties could be furnished.

A trial date has not been set yet, and the court will convene to determine if the case is trial ready at the next hearing in three months.

News24 previously reported that the Constitutional Court had dismissed their appeal for a stay of prosecution with costs, because "it lacks reasonable prospects of success".

Thales stands accused of offering Zuma a R500 000-a-year bribe in exchange for his political protection when he was deputy president. They are embroiled in the infamous R60-billion arms deal saga.

The company sought direct access to the Constitutional Court, after the Pietermaritzburg High Court dismissed its application for a permanent stay of its corruption prosecution.

R446k for one Daily Lotto winner!
Full list of lottery results
Lockdown For
DAYS
HRS
MINS
Voting Booth
When and why would you have your or your partner's sperm count checked?
Please select an option Oops! Something went wrong, please try again later.
That's an unnecessary procedure
17% - 987 votes
As soon as we decide to start a family
7% - 439 votes
Only if we're struggling to conceive
76% - 4535 votes
Previous Results
Podcasts
PODCAST | The Story: Racism rife in South African schools