"Are they going to employ us should we lose our jobs."

Mary Motloung* reiterated her fear about the prospect of unemployment faced by many.

Motloung is one of several locals employed at the Katlehong mall.

READ | Military to be deployed in KZN, Gauteng to quell pro-Zuma violence

She was reduced to tears on Monday morning as she watched her fellow Katlehong neighbours looting shops at the Letsoho Shopping Centre. An elderly woman screams as she is arrested by a police member following looting and vandalism at the Lotsoho Mall in Katlehong township, east of Johannesburg.
AFP Phill Magakoe / AFP 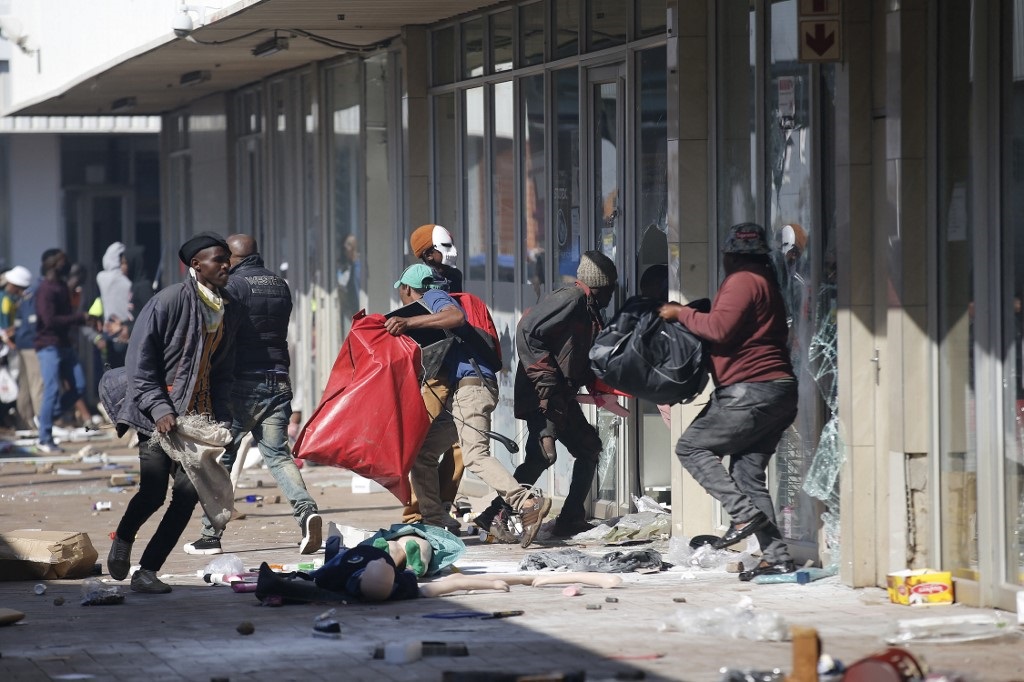 Motloung works at a Spar supermarket, which fell victim to looting by hundreds, if not thousands, of residents.

"I don't know if I am going to be working tomorrow. Our jobs are on the line because of their looting. Will those who looted shops find us alternative employment, should we be dismissed?" Motloung asked.

#ZumaUnrest looters have now entered on the other of Letsoho shopping centre in Katlehong @TeamNews24 pic.twitter.com/uZ7vUwOaKy

Rikhotso was also worried about his livelihood. He resides in the township.

"This is no longer a protest, but crime. We need to be realistic and describe it as it is. People are losing their jobs.

"They are lying when they say they are looting in order for (former president) Jacob Zuma to be released. Those who want him released know where his new home is. They must go to that jail and protest, not by damaging our township economy," Rikhotso said.

Another resident, Zodwa Mthembu, described the looting of township malls as an embarrassment.

Mthembu said the looting would have a prolonged impact on the township economy as well as jobs.

#ZumaUnrest a policeman firing at a looter at Letsoho shopping centre in Katlehong @TeamNews24 pic.twitter.com/TvJ4ayJQsC

"This is embarrassing. Our children are going to lose jobs. There are many who are currently looking for employment. Where will they find jobs if we burn and steal?

"Our president must do something quickly before these protests escalate further. Those who are looting are not worried at all," Mthembu said.

Meanwhile, looting continued into the early evening on Monday at the Letsoho Shopping Centre.

READ | Zuma unrest: Can the police handle the rioting? We ask experts

The number of looters currently outnumbers police in the area.

A number of people have been arrested, while looting continues despite a police presence in Katlehong. People flee from police as they carry goods while looting and vandalising the Lotsoho Mall in Katlehong township, East of Johannesburg.
AFPPhill Magakoe / AFP A member of the South African Police Services (SAPS) arrests a looter inside the Lotsoho Mall in Katlehong township, East of Johannesburg.
AFP Phill Magakoe / AFP

All shops at the centre were being looted by residents of Katlehong. Some arrived carrying bags, which they used to load their loot.

Police officers in the area have fired rubber bullets in an attempt to stop residents from stealing. However, looters brazenly walked into shops to steal.

An elderly Katlehong man was shot dead during the looting and unrest.

On Monday morning, News24 saw the man's bleeding body on the street, outside the shopping centre where looting was taking place.

The man was shot dead as residents in the area continued looting shops. It is not known who shot the man, but residents claim security guards opened fire with live ammunition in an attempt to disperse the looters.

We live in a world where facts and fiction get blurred
In times of uncertainty you need journalism you can trust. For 14 free days, you can have access to a world of in-depth analyses, investigative journalism, top opinions and a range of features. Journalism strengthens democracy. Invest in the future today. Thereafter you will be billed R75 per month. You can cancel anytime and if you cancel within 14 days you won't be billed.
Subscribe to News24
Next on News24
BREAKING NEWS LIVE | Have you seen him? Man wanted for abducting, raping child in Cape Town