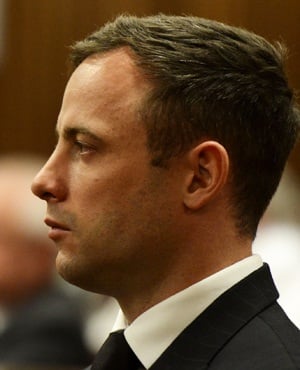 Oscar Pistorius in the dock in the North Gauteng High Court. (Herman Verwey/Media24/Pool)

Johannesburg - The National Prosecuting Authority (NPA) has given notice of its intention to appeal paralympian Oscar Pistorius's culpable homicide conviction for killing his girlfriend Reeva Steenkamp, it said on Thursday.

Pistorius's defence team was served with the notice on Friday, and the North Gauteng High Court and the Supreme Court of Appeal were sent the notices on Monday, spokesperson Velekhaya Mgobhozi said.

Mgobhozi said the State would wait for transcripts of the court's record before filing its papers.

Pistorius will continue serving his current sentence in the meanwhile.

On 21 October, Masipa sentenced Pistorius to five years in jail for the culpable homicide of Steenkamp. He may apply to be released on correctional supervision after serving a sixth (10 months) of the term.

Prosecutor Gerrie Nel argued that the sentence imposed on Pistorius was "shockingly inappropriate". However, Barry Roux, for Pistorius, said the law was correctly applied in convicting and sentencing.

Pistorius fired four shots through the locked door of a toilet at his Pretoria home on Valentine's Day in 2013, apparently thinking Steenkamp was an intruder.

The State argued at the time that the court should reserve four issues for consideration, including whether the principles of dolus eventualis were correctly applied to the case.

During sentencing on 11 September, Masipa said it was important to ascertain whether Pistorius intended to kill when he fired four shots at the locked toilet door.

Someone found guilty of murder dolus eventualis would have foreseen that their actions would cause someone's death, but carried on regardless.

Nel argued that Steenkamp was shot dead in "the most horrendous circumstances".

Pistorius was sentenced to a further three years, suspended for five years, for discharging a firearm at Tasha's restaurant in Sandton, Johannesburg, in January 2013. The State did not include this in the intention to appeal.

We live in a world where facts and fiction get blurred
In times of uncertainty you need journalism you can trust. For only R75 per month, you have access to a world of in-depth analyses, investigative journalism, top opinions and a range of features. Journalism strengthens democracy. Invest in the future today.
Subscribe to News24
Related Links
Oscar stripped of honorary doctorate
Oscar could still face murder conviction
State granted leave to appeal Pistorius conviction
Next on News24
WATCH: New four-part Oscar Pistorius documentary to air on Amazon Prime Video