Share
Johannesburg - President Jacob Zuma has praised the late Ilse Naude as a pioneer in non-racialism following her death this week.

"We will always remember Tannie Ilse as the pillar beside her late husband, Dr Beyers Naude, a pioneer of non-racialism and one of the stalwarts of our struggle for liberation both here and abroad," said Zuma.

"They both loved and were loved by our people, black and white."

Ilse Naude, the wife of Afrikaner theologian and anti-apartheid activist Beyers Naude, died of a heart attack on Thursday.

Johan Naude, the eldest son of the couple, told Die Burger newspaper that were it not for his mother's strength, his father would never have achieved what he did in the fight against apartheid.

The two met at Stellenbosch University where he studied theology and mathematics.

"His strength is of body and spirit and is the sort of power and indomitable spirit that beat the evil of apartheid and made him a hero of our people," Mandela said.

"If someone asks me what a new South African should be, I will say 'Look at Beyers and his wife, Ilse'."

We live in a world where facts and fiction get blurred
In times of uncertainty you need journalism you can trust. For only R75 per month, you have access to a world of in-depth analyses, investigative journalism, top opinions and a range of features. Journalism strengthens democracy. Invest in the future today.
Subscribe to News24
Next on News24
David Mabuza to answer questions on SAA bailout, land reform and Eskom in National Assembly 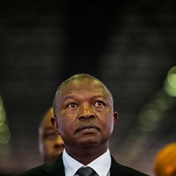