Scott Ramsay
Share
It was the blackest part of a moonless night, when the stars were at their brightest. I was alone at the campfire, while seven other trailists slept nearby.

It was my job to keep the fire going, and to keep watch for lions, elephants, buffalos or leopards, which could wander into our makeshift campsite. We were on the Primitive Wilderness Trail, in Hluhluwe-iMfolozi Game Reserve in South Africa.

For five days and four nights we explored Africa’s oldest proclaimed wilderness area, walking alongside wild animals, sleeping under the stars and reconnecting to the timeless rhythms of ancient Africa.

A lion started roaring in the distance. Then another roared, closer to camp. I shone the torch into the bushveld, and two golden eyes blinked back at me.

Suddenly a hyena called, as if it was challenging the blackness of night itself.

The whoop-whoop echoed off the nearby cliffs.

I stoked the fire and felt a deep peace. “If you see something dangerous – like a lion - walking directly towards camp, then wake me,” our Zulu trails guide Nunu Jobe had explained earlier in the evening.

“But if the lion is walking past us, just enjoy it and don’t wake me. It’s a privilege to be alone with a wild animal like that…”

Then, just after another lion roared, I heard a distant blast.

Two coal mines operate outside the rerve, a few kilometres from the boundary.

A few minutes later, I heard the rumble of a train, and saw it’s bright light shining into the night sky on the far horizon. It was the coal train that takes its bounty at night to the port of Richard’s Bay on the Indian Ocean coast.

Could there be a more incongruous sound and sight? Near the southern boundary of Hluhluwe-iMfolozi Park, where the proposed Fuleni Coal mine is being planned

The 300 square kilometre wilderness is one third of the 900 square kilometre Hluhluwe-iMfolozi Park. Proclaimed in 1895 to protect the last 50-odd white rhino in Africa, the park is one of the oldest formal protected areas on the continent.

Today, each one of the 20 000 or so white rhino in Africa are descended from those few saved at Imfolozi more than a century ago. It is one of the greatest conservation success stories.

The wilderness area lies in the south of the reserve, and is off-limits to any development whatsoever.

It is an untarnished pocket of ancient Africa, a place where the iconic wild animals are left alone in peace. While the rest of the park has extensive tourism facilities, the only way to explore the wilderness is on foot, on one of the guided wilderness trails.

Unsurprisingly, the park is also the most famous wildlife destination in KwaZulu-Natal, drawing thousands of local and international tourists every month, many of which walk the variety of trails in the dedicated wilderness area. Now, a third open-cast coal mine is planned for imminent development on the reserve’s southern boundary, right next to the wilderness area. Unlike the other two mines (Somkhele and Zululand Anthracite Colliery), which are situated a few kilometres away, the proposed Fuleni mine is planned to operate within 30 to 70 metres of the park’s southern fence-line.

“Undoubtedly the noise, blasting, vibrations and other side-effects of the Fuleni mine will have a severe adverse impact on this world-famous wilderness area,” explained Morgan Griffiths from WESSA (Wildlife and Environment Society of South Africa).

“The managers of Ezemvelo KwaZulu-Natal Wildlife have already reported that the existing Zululand Anthracite Colliery and Somkhele Mine – both of which are situated much further away from the park fence line than the proposed Fuleni Mine – already affect the park adversely.”

“Mining noise can, for example, be heard within the park’s boundaries, particularly at night, and this impacts both the fauna and tourism.”

There are other threats, besides noise, light and coal dust pollution. Acid mine leachate from existing, closed and abandoned mines has already polluted key water sources in South Africa, creating environmental and social problems for rural communities.

The White Imfolozi River is the lifeblood of the reserve, and of the extensive rural communities outside it. Already, its flow has been severely reduced by upstream and downstream commercial use by the existing coal mines, sugar cane farms and tree plantations. 
Now the risk of acid-mine drainage poses another threat.

Any pollution of the water source would be detrimental to both people and domestic or wild animals. Of course, rhino poaching is a critical concern, and the location of a mine right on the border of the wilderness area would only cause even more problems for the rangers who patrol the area.

But the problem of a coal mine right on the park’s boundary is not a new one, explained Griffiths.

“When the Somkhele mining company discovered another viable coal seam close to the park boundary a few years ago, they acknowledged the tangible value of the iMfolozi wilderness area and chose not to mine this seam,” Griffiths said.

“Instead they selected a seam further away to reduce the negative impacts on the Hluhluwe-iMfolozi Park.”

Early the next morning, under a golden sun, the trailists sat around the campfire drinking coffee.

I told Nunu about the blasting I had heard, and the train lights on the horizon. “We hear and see that regularly while on trail,” Nunu said.

“I’ve guided tourists on this trail more than 120 times, so I’ve spent more than two years solidly in this wilderness area.”

“What I don’t understand,” Nunu went on, “is that the government should be investing in tourism in this area. We already have one of the best game reserves in Africa, with millions of tourists coming to the region to see the wild animals.” 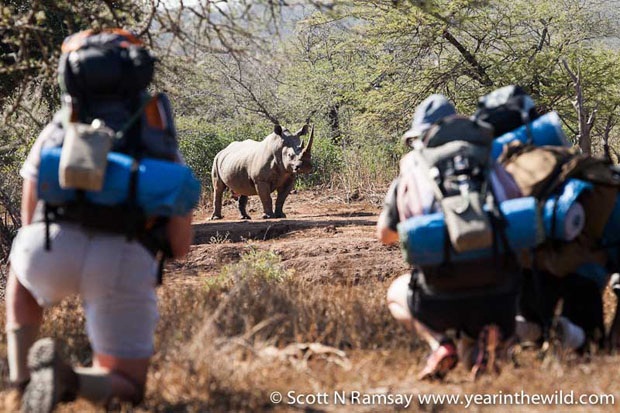 Trailists on the wilderness trails are able to get up close on foot to white rhino, which were saved from extinction at Hluhluwe-iMfolozi

“We all need jobs, and the communities must benefit, but if there is another mine here, close to the park, then surely the government is telling people that our park jobs don’t matter?”

“There are hundreds of local people working at Hluhluwe-iMfolozi, and these jobs will always be there if we look after the land and the wild animals. Unlike mining jobs, which will eventually disappear, leaving a damaged, useless land”.

Ultimately, however, I couldn’t help but wonder: what about the rights of the wild animals themselves?

Already most of Africa’s natural habitat has been transformed, and the continent’s iconic wildlife – which is so valuable from a biodiversity and jobs perspective – has disappeared.

Surely, we should consider Africa’s protected areas as sacrosanct and worthy of the utmost protection?

For the Primitive Wilderness Trail, e-mail trails@kznwildlife.com or go to www.kznwildlife.com. The five-day trail costs about R2 800 per person, fully guided, including all food, backpack and sleeping bag. Click here to sign the petition to help stop the Fuleni mine.

We live in a world where facts and fiction get blurred
In times of uncertainty you need journalism you can trust. For 14 free days, you can have access to a world of in-depth analyses, investigative journalism, top opinions and a range of features. Journalism strengthens democracy. Invest in the future today. Thereafter you will be billed R75 per month. You can cancel anytime and if you cancel within 14 days you won't be billed.
Subscribe to News24
Related Links
Hluhluwe-iMfolozi Park - at risk of mining
Drakensberg: Barrier of spears
A Year in the Wild: Mfolozi, KZN
Next on News24
Sleepy coastal towns in SA where you can avoid the summer crowds