In the company of wild lions

Two male lions had just killed a blue wildebeest. By the time we arrived at the scene of death, the feline brothers had already dragged the carcass into the shade of a knobthorn tree. They set about devouring their prey with the efficiency of two seasoned butchers.

First the stomach and organs, then the soft hindquarters, and then they got stuck into the leg bones. Growling contentedly, they used their razor-sharp carnassial teeth to snap the shinbones and chew the rich bone marrow.

I was on a game-drive vehicle with guide Geoffrey Mdlhuli from Notten’s Bush Camp in Sabi Sands Game Reserve.

We were only five metres away and I could hear clearly the crunching of bones. I won’t forget it soon. Perhaps the sound called forth a primordial genetic memory in my own subconscious, when predators used to stalk – and try to kill - my ancient ancestors a hundred thousand years ago. 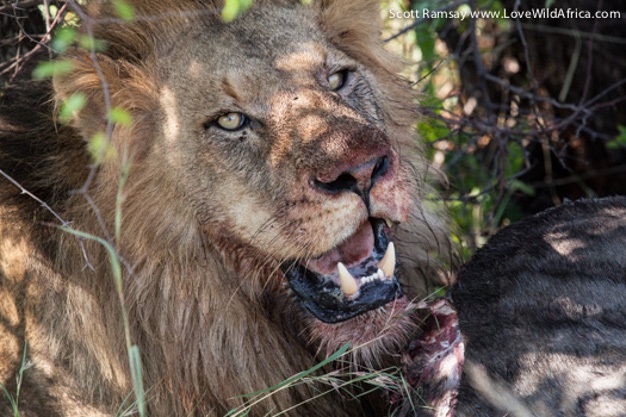 The greater Kruger National Park, including Sabi Sands, is one of the last places in Africa where wild lions occur. According to Dr Guy Balme of research organization Panthera, in the last 100 years lions have disappeared from 83 per cent of their historic range.

“Now that might sound like a fair number but that’s not dissimilar to the number of rhinos which are left in the wild today,” Dr Balme explained. “Just think how often we hear about rhinos in our media.”

“Lions in Africa are currently listed as vulnerable on the IUCN Red List, but that will probably change soon to endangered.”

According to Dr Balme, there are only six lion populations left in Africa which have more than a thousand individuals, a number which is considered viable in the long term.

Lions in West Africa are almost extinct. Panthera’s research shows that only about 250 of these genetically distinct cats remain in an area just 1 percent of their original range.

In East Africa, considered by many to be a stronghold for lions, Dr Balme says their numbers have dropped by 60 per cent, and “this is probably an optimistic figure.”

Estimates of Southern African lions have actually increased 8 per cent in the wild during the last 20 years, largely because of private wildlife reserves in South Africa, whose population has grown to 800 wild lions across 45 different reserves.

But remarkably there is little habitat left in the country that is suitable for lions. Most of South Africa’s land has been converted to farming, agriculture or cities and towns. What’s left are small pockets of nature, some of which has been turned into private game reserves.

These properties can only carry a small number of lions, so conservationists are forced to euthanize some wild cubs when they are born. Some reserves don’t want to receive lions, even for free, because they pose a danger to surrounding rural communities, and a predator-proof fence is expensive to erect.

Sadly, the biggest single population of lions in South Africa is those bred in captivity, to be sold to hunters and unscrupulous zoos. More than 6 000 lions are stuck in small enclosures and cages.

But these lions have been in-bred and are in no way useful to the long-term conservation of the genetics of the wild species. Uneducated and uninformed visitors who pay money to have their photograph taken while stroking a captive-bred lion believe that these animals will one day be reintroduced into the wild.

Mostly that’s not the case.

As I watched the two male lions in Sabi Sands slowly devour the whole wildebeest, they ignored us in the vehicle. For wild animals here, vehicles with humans are regular, innocuous attendants in their lives.

For the past few decades the greater Kruger National Park has been protected, and hunting or persecution of lions has been mostly absent, although it wasn’t always this way.

In the early 1900s warden James Stevenson-Hamilton and his rangers shot predators on sight, wrongly believing it would help restore antelope populations that had been decimated by colonial hunters before the proclamation of the park.

Between 1974 and 1978, Kruger’s authorities killed more than 300 lions in a clandestine culling operation to allow rare antelope to re-establish themselves. But eventually the dark secret emerged and the public was outraged.

These days there is no culling or hunting of lions in greater Kruger National Park, including Sabi Sands, and the lions are habituated to the presence of humans in vehicles. Elsewhere in the country and continent, hunting of wild lions does occur.

“There are about 250 wild lions hunted in Africa every year,” Dr Balme said. “A few years ago this number was closer to 500 but there really has been scrutiny placed on lion hunting in recent years.”

“Although I can’t stand hunting, it’s something we’re forced to deal with in Africa, and it does have great potential to raise money for conservation of natural habitat and land.”

“But it must be strictly controlled, and unfortunately, in most places in Africa we have evidence that it’s not being well managed, purely because of the money involved.”

Trophy hunting may generate significant revenue, but the greater Kruger National Park attracts more than a million tourists from across the world. Wild lions are one big reason why they come to Africa in the first place. Lions are synonymous with Africa. Do we really want to promote the killing of something that defines the continent?

Without wild lions, what would Africa be?

As fascinating as Africa’s biggest cats can be when they’re awake, they can seem boring when sleeping. Nevertheless we stayed a while longer, knowing what a privilege it was to be in the close company of wild lions.

We live in a world where facts and fiction get blurred
In times of uncertainty you need journalism you can trust. For only R75 per month, you have access to a world of in-depth analyses, investigative journalism, top opinions and a range of features. Journalism strengthens democracy. Invest in the future today.
Subscribe to News24
Related Links
Kariega rhino poaching survivor's baby girl named
WATCH: Terrifying (and hilarious) video of lion opening car door goes viral a year later
Wild Mandela: conservationist and lover of the land
Next on News24
Sleepy coastal towns in SA where you can avoid the summer crowds

Perfect start to the month for 1 Daily Lotto player!
Full list of lottery results
Lockdown For
DAYS
HRS
MINS
Voting Booth
Should Covid-19 vaccinations be mandatory for employees in workplaces?
Please select an option Oops! Something went wrong, please try again later.
Yes, it is the responsible thing to do
47% - 6167 votes
No, vaccination should be an individual choice
43% - 5630 votes
No, but those who are unvaccinated should have to work from home
11% - 1388 votes
Previous Results
Podcasts
PODCAST | The Story: Surviving Covid-19 and unrest: - will our economy ever recover?