The drivers of an ADT vehicle were held at gunpoint in Johannesburg... and the entire scene was captured by Google Street View.

The images, which were captured by Google in February this year, show the assailant pointing a gun at the ADT security guard on Junction Road in the suburb of Bramley near Illovo.

Due to Google’s Street View policies the licence plate of the robbers’ BMW and the branding of the ADT patrol vehicle have been blurred out.

See the Google images below of the armed robbery in progress: 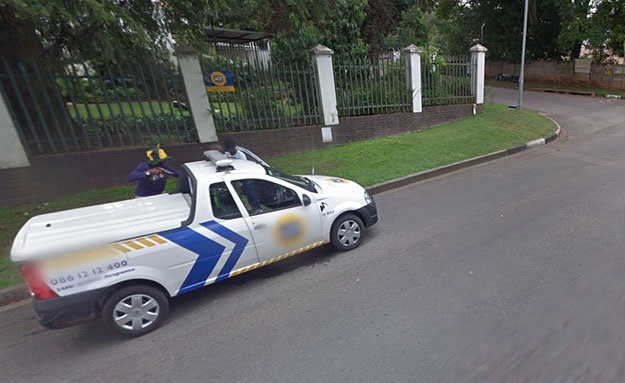 Here is the hyperlink to the street view on Google Maps. Click here.

The incident took place within viewing distance from the nearest neighbourhood patrol station; unfortunately the station guard remained oblivious to the assault happening metres away.

"It was an opportunistic crime where an ADT Reaction Officer was held at gunpoint by two criminals in Johannesburg. No one was injured in the incident. The Reaction Officer’s weapon was stolen."

According to Kotze, police and ADT investigated the incident but no arrests were made at the time.

We live in a world where facts and fiction get blurred
In times of uncertainty you need journalism you can trust. For 14 free days, you can have access to a world of in-depth analyses, investigative journalism, top opinions and a range of features. Journalism strengthens democracy. Invest in the future today. Thereafter you will be billed R75 per month. You can cancel anytime and if you cancel within 14 days you won't be billed.
Subscribe to News24
Related Links
Africans are creating content for Africans - Google SA
Next on News24
PODCAST | The Story: Plett beaches reopen after 'rare' deadly shark attack