WATCH: We take you inside a robotic surgery in Pretoria 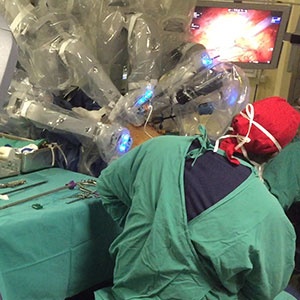 At first glance the machine looks daunting - like a creature with multiple limbs that's sole aim is to invade your body.

But the more you look at this machine used for robotic surgery the more you realise this is how you would like your future operations to be done.

At a theatre at The Urology Hospital in Pretoria, Dr Lance Coetzee sits about two metres away from a patient under the machine, his face firmly planted into a control panel and his hands working controls in what looks like a virtual reality video game arcade cabinet from the future.

A small movement from his hand on a control is translated into a movement for one of the robot's arms - including the snipping of a tiny scissor at the end of one of the arms.
Technically, one could use the controls on the other side of the country, or in another country, if necessary.

Overseeing the prostatectomy, which is the removal of the prostate for this patient who has cancer there, is Dr Vipul Patel from the United States of America, the world's foremost urological robotic surgeon - with over 9000 cases under his belt.

Speaking to a group of urologists watching the procedure on screens several rooms away, the two discuss their methods of surgery - while Coetzee snips away tissue.

Both doctors maintain that this is the future of treating prostate cancer in South Africa.

" I am here to teach in South Africa as they are embarking on a very exciting journey," Patel tells News24 before the surgery.

"That journey is to bring robotic surgery to South Africa and to help disseminate its advantages throughout the country... robotics has become the standard of care in the United States.

"The debate over open surgery and robotic surgery and open surgery versus radiation and all other alternatives has happened already in the US and what we found is that  [with] patients that are young and healthy - it is more advantageous for them to have the cancer removed [with the robot]."

He says there are numerous advantages, including less blood loss, less pain, more control over the cancer while maintaining continence of urine and sexual function.

"Today we have a young patient with prostate cancer... So our goal is to remove his prostate and at the same time maintain his quality of life for continence and sexual function."

Coetzee who has been at the hospital since its inception in 1996 says they got the R20 million device in October 2013. At the time, it was the first in the country.

He first had to train on simulators and then at live animal labs in Europe, before having his first 10 to 15 operations on the machine being overseen by a proctor, who teaches robotic surgery.

After he completed 50 cases, he became a proctor himself.

"It [the machine] allows greater precision, and allows an improved view inside the patient because you can zoom in and out [with a camera on the robot]," Coetzee says.

"It has taken over in the rest of the world  and the sky really is the limit, especially as the costs come down and it becomes more affordable. "

He said however that robotic surgeries would still be done at larger hospitals and not small periphery ones.

"It is a highly specialised skill."

We live in a world where facts and fiction get blurred
In times of uncertainty you need journalism you can trust. For only R75 per month, you have access to a world of in-depth analyses, investigative journalism, top opinions and a range of features. Journalism strengthens democracy. Invest in the future today.
Subscribe to News24
Related Links
Watch as one-year-old undergoes cranial remodeling surgery
Next on News24
WATCH | Cops on the hunt for gunmen who hijacked 2 security officers in Limpopo

3 bag the Daily Lotto jackpot!
Full list of lottery results
Lockdown For
DAYS
HRS
MINS
Voting Booth
President Ramaphosa has punted the idea of mandatory Covid-19 vaccinations for South Africans. This is:
Please select an option Oops! Something went wrong, please try again later.
The right thing to do. We desperately need more South Africans vaccinated to prevent further mutations and restore normality in our lives.
70% - 12699 votes
A risky strategy. Compulsory vaccinations may have unintended consequences and damage our rollout campaign.
30% - 5403 votes
Previous Results
Podcasts
PODCAST | The Story: The Omicron variant and what we know so far