WATCH: From life on the street to permanent employment - How one good deed changed this former beggar's life Twenty-two-year-old Sibongiseni Nkosi is proudly earning his keep as a petrol attendant after he assisted a motorist whose car broke down.
Chante Schatz, News24

Twenty-two-year-old Sibongiseni Nkosi is proudly earning his keep as a petrol attendant after one act of kindness landed him the job.

Nkosi helped motorist Vic Campher push his broken down car three weeks ago - something Nkosi never thought would turn his life around.

Campher, whose hobby involves classic cars, told News24 he was driving his old Jaguar down Kingsway Avenue, Johannesburg, when it broke down and he was stuck.

"It was 18:30 and getting dark. I was worried about how to get back but then Tom, which is Sibongiseni's street name, came running along and started helping me."

Campher said they had to push the car back to the Volvo dealership where he is a managing director. 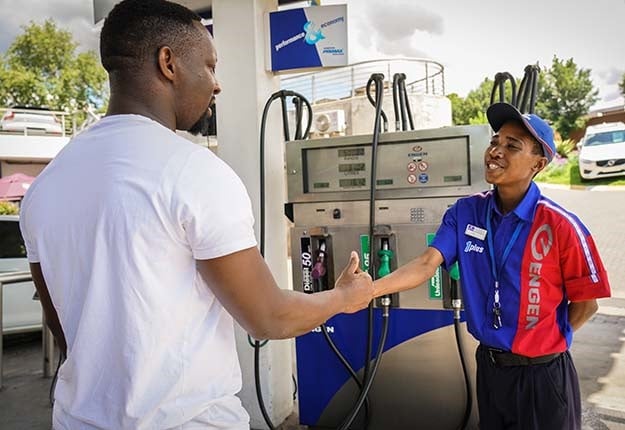 Motorists were surprised to find Sibongiseni Nkosi filling up tanks at an Engen garage in Johannesburg as most remembered him asking for money at the nearby set of robots. (Chanté Schatz, News24)

"I didn't think he would give me a job as a petrol attendant, I thought I would sweep the yard or something, not this," Nkosi said as he was filling a motorist's tank.

Nkosi, who lived on the streets for more than three years, said he was grateful that he no longer had to deal with the hardships of being homeless.

"It was tough. In winter, if I left my blanket somewhere, when I got back someone would've already taken it from me."

"I'm just happy that I am getting my complexion back again because the sun is so bad when you are in the streets," he said.

READ: Former beggar's kind act to help motorist whose car broke down lands him a job

As a recovering drug addict, Nkosi told News24 that he wanted to build a new life for himself by going back to school.

"I feel very lucky that I was able to get a job without finishing school. However, I would be very happy to get assistance to finish my schooling career and keep my job."

He said that once done, he would like to study to become a lawyer or a mechanical engineer.

After just three weeks on the job, Nkosi excelled to such an extent that Campher told him to remove his trainee bib on Friday.

"He has learnt so fast in these last few weeks, I have no doubt that he will be just fine," said Campher. Twenty-two-year-old Sibongiseni Nkosi sits near a petrol pump after removing his trainee bib at an Engen garage in Johannesburg. (Chanté Schatz, News24)

Have you got a Feel Good story to tell? We want to hear it! Mail us your story at feelgood@news24.com and one of our journalists could be giving you a call. If you'd just like to read about the good South Africans are doing daily, head over to our Feel Good section!

We live in a world where facts and fiction get blurred
In times of uncertainty you need journalism you can trust. For only R75 per month, you have access to a world of in-depth analyses, investigative journalism, top opinions and a range of features. Journalism strengthens democracy. Invest in the future today.
Subscribe to News24
Related Links
WATCH: R440 000 and counting for petrol attendant
WATCH | Crocheting pair knit their way off the streets with help from an 'angel'
WATCH | Joy as Khayelitsha baseball player hits world cup funding target
Next on News24
WATCH | Khoi and San groups battle over redevelopment of River Club site for Amazon's new Africa HQ