What happens to Zuma when Parly police remove the EFF? Watch... 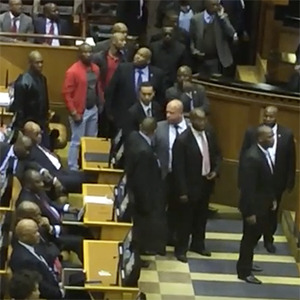 All eyes were on the EFF in Parliament on Tuesday as protection officers forcibly removed the red party from their benches.

News24's Erin Bates captured footage of the president during the heated altercation. Watch as President Jacob Zuma's security guards form a tight huddle around the president, protecting him from potential harm.

The EFF's chaotic exit from the National Assembly spilled over into the corridors of Parliament. Pumped-up EFF members were shunted out of the building, shaking off those grabbing them, and grabbing items including a dustbin and a broom to throw at their opponents. Watch more here.

Support independent journalism
Subscribe to News24 for just R75 per month to read all our investigative and in-depth journalism. You can cancel any time.
Subscribe
Already a subscriber? Sign in
Next on News24
WATCH | Khoi and San groups battle over redevelopment of River Club site for Amazon's new Africa HQ

Here are the results for the Daily Lotto draw
Full list of lottery results
Lockdown For
DAYS
HRS
MINS
Voting Booth
Matric results are out! Are you happy with your child's result?
Please select an option Oops! Something went wrong, please try again later.
No, the pandemic really messed up their ability to focus
33% - 666 votes
Yes, they did well given the circumstances
67% - 1348 votes
Previous Results
Podcasts
LISTEN | The Inge Lotz Story - a miscarriage of justice