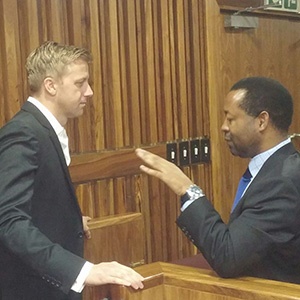 Watch as Gareth Cliff and his lawyer Eric Mabuza give comments after Cliff's successful court result. Cliff says he is "very pleased"with the outcome, while his lawyer says this indicates that "everyone is equal before the law".

Axed Idols judge Cliff won a mammoth lawsuit against M-Net on Friday, hours before the first auditions for the show were due to start.

The celebrity won his bid to be reinstated as a judge of the popular talent scouting show, Judge Caroline Nicholls ruled in the High Court in Johannesburg.

Read this for free
Get 14 days free to read all our investigative and in-depth journalism. Thereafter you will be billed R75 per month. You can cancel anytime and if you cancel within 14 days you won't be billed.
Subscribe
Already a subscriber? Sign in
Next on News24
PODCAST | The Story: Inside the Babita Deokaran scandal with News24 investigations