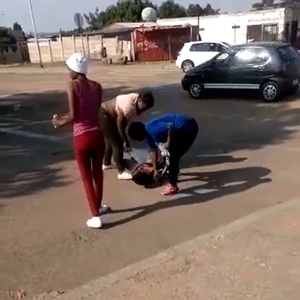 An off-duty metro cop who was caught on camera in a vicious fight on April 14, could face the full might of the law.

In the footage, the Tshwane metro police officer can be seen kicking an unnamed woman, who is being held down by someone else.

The incident took place in Hammanskraal, north of Pretoria.

Tshwane metro police spokesperson, Senior Superintendent Isaac Mahamba, told News24 that an assault complaint had been reported to the police and that the officer had been taken in for questioning. A statement was taken from the officer.

Mahamba said the National Prosecuting Authority has been given the docket and will have to decide if the case will go to court.

"Remember, that happened while the lady was off duty. She was not in uniform. She was taken in for questioning by SAPS, not us," he said.

Tshwane metro police say any potential disciplinary proceedings are dependent on the outcome of the NPA's decision on whether to pursue a case against the officer.

When News24 spoke to Captain Sarah Lesabane, she said the SAPS were unaware of the case.

We live in a world where facts and fiction get blurred
In times of uncertainty you need journalism you can trust. For only R75 per month, you have access to a world of in-depth analyses, investigative journalism, top opinions and a range of features. Journalism strengthens democracy. Invest in the future today.
Subscribe to News24
Related Links
WATCH: Traffic cops 'eating money'
WATCH: Police officers allegedly assault woman at Canal Walk
Next on News24
WATCH | Pandemic gives uniform manufacturer's business growth and happy returns