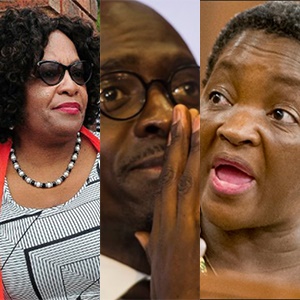 This week on POLOTIKI, we are counting down to the 2019 national elections and political parties have submitted their candidate lists to the Independent Electoral Commission of South Africa (IEC).

Some courageous decisions were made with the EFF including student activists who were involved in the Fees Must Fall movement and the ANC sticking with familiar faces.

Black First Land First (BLF) also submitted a list and might be going to the National Assembly.

From food parcels to combi courts: Gauteng sports and recreation MEC Faith Mazibuko is in hot water following the release of an audio clip in which she is heard threatening staffers with dismissal as she pressures them to deliver sporting facilities known as "combi courts" before the elections.

News24 senior political reporter Tshidi Madia and News24 associate editor for in-depth news Pieter du Toit also discuss the findings of a high-level review panel report on the State Security Agency (SSA) which revealed that not only was the SSA repurposed to serve former president Jacob Zuma's interests, but was created irregularly in terms of the Constitution.

ANALYSIS | From Mandela to Mbeki and Zuma: How the spooks became obsessed with 'political intelligence gathering'

We live in a world where facts and fiction get blurred
In times of uncertainty you need journalism you can trust. For only R75 per month, you have access to a world of in-depth analyses, investigative journalism, top opinions and a range of features. Journalism strengthens democracy. Invest in the future today.
Subscribe to News24
Related Links
PODCAST | Justice Denied, Episode 3: Sentenced to 10 years after attacking her would-be rapist
PODCAST: The fiery, smart, sharp and difficult Julius Malema
PODCAST | Justice Denied, Episode 2: 'Freedom or death' - the choices for a man wrongfully...
Next on News24
PODCAST | The Story: Public Protector Busisiwe Mkhwebane's fate hangs in the balance

3 bag the jackpot in the Daily Lotto!
Full list of lottery results
Lockdown For
DAYS
HRS
MINS
Voting Booth
When and why would you have your or your partner's sperm count checked?
Please select an option Oops! Something went wrong, please try again later.
That's an unnecessary procedure
17% - 643 votes
As soon as we decide to start a family
7% - 272 votes
Only if we're struggling to conceive
76% - 2929 votes
Previous Results
Podcasts
PODCAST | The Story: Public Protector Busisiwe Mkhwebane's fate hangs in the balance