SEE | Hundreds flock to see the snow in Matroosberg over the weekend, many for the first time

People waited in a long queue to enter the Matroosberg Nature Reserve on Saturday to get a first-hand glimpse of the snow that fell over the Western Cape highlands on the weekend.

The intense cold front that hit South Africa on Thursday created the perfect winter wonderland thanks to widespread snowfall in the Eastern Cape, Lesotho and areas across the Western Cape.

The muddy and ice-cold conditions didn't deter people from hiking the short distance into the mountains to play in the snow - many for the first time.

"This is breathtaking," said TEFL teacher Donito Adonis who got to hold snow for the first time. "I never thought I'd see snow like this in South Africa," he told News24.

Chartered accountant, Stephanie Bugan, who visited the nature reserve with her family said that although she expected more snow, the "bumpy" ride was worth it.

"A couple of minutes ago it actually snowed and we felt the snow so that was nice," she told News24.

The top of the mountain was off limits to 4x4 vehicles as the conditions were too extreme, the nature reserve posted on their Facebook page on Saturday. However, an array of snowmen dotted the area where people tossed snowballs at one other at the base of the mountain. Visitors to the Matroosberg Nature Reserve enjoy the snow that fell over the weekend thanks to an intense colf front, on Saturday 11 July 2020.
News24 Amy Gibbings/News24 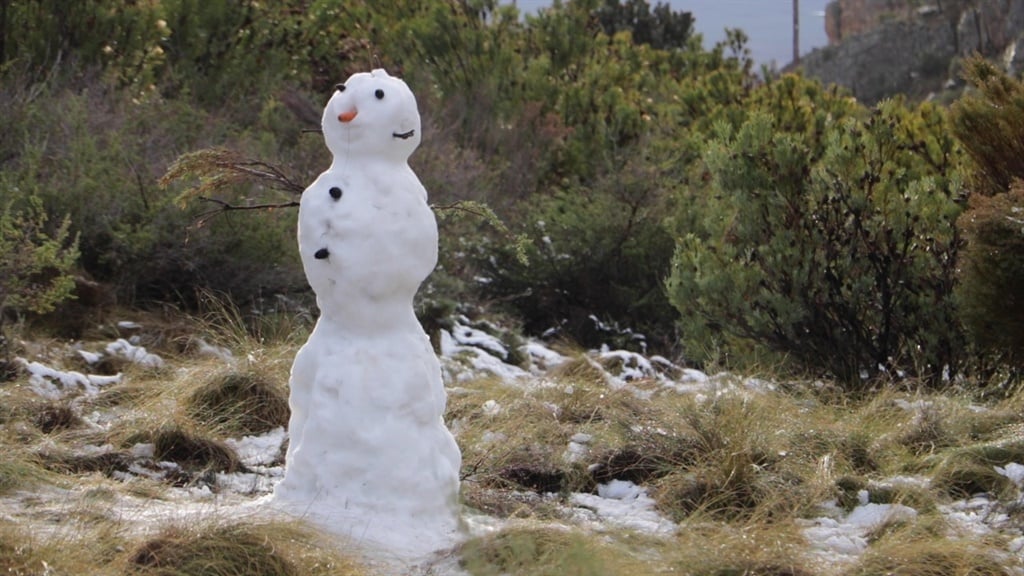 "There is no way we can take anybody up the mountain or let any vehicle drive themselves as you cannot see the road. Snowing all over again, sub-zero temperatures. Cannot believe the bottom half of the mountain is having fun and we don't know if we are going uphill or downhill," the post read.

They also apologised for the very long queues and promised to do their best to help everyone enjoy their visit.

Siblings, Londa and Lunathi Mchunu, were engaged in a snowball battle, throwing the occasional snowball in their mother's direction.

"This is the only time we actually get to hit our mom," laughed Londa. Her brother added, "The movies make it look a lot softer."

A horn was sounded just after 17:00 to let all visitors know it was time to exit the park.

According to the South African Weather Service, the cold front is expected to affect the Western Cape and Northern Cape into Monday.

We live in a world where facts and fiction get blurred
In times of uncertainty you need journalism you can trust. For 14 free days, you can have access to a world of in-depth analyses, investigative journalism, top opinions and a range of features. Journalism strengthens democracy. Invest in the future today. Thereafter you will be billed R75 per month. You can cancel anytime and if you cancel within 14 days you won't be billed.
Subscribe to News24
Related Links
Sunday's weather: Gale force winds, heavy rain as cold front batters Western, Northern Cape
WATCH | Cape provinces turn into winter wonderland with widespread snow
Brrrace yourselves: 'Major' cold front to bring heavy rain, snow to SA
Next on News24
WATCH | Day 2: Public Protector applies for interdict against Parliament, Ramaphosa