The Wandile Bozwana case: A killing that epitomises the role of assassinations in SA today 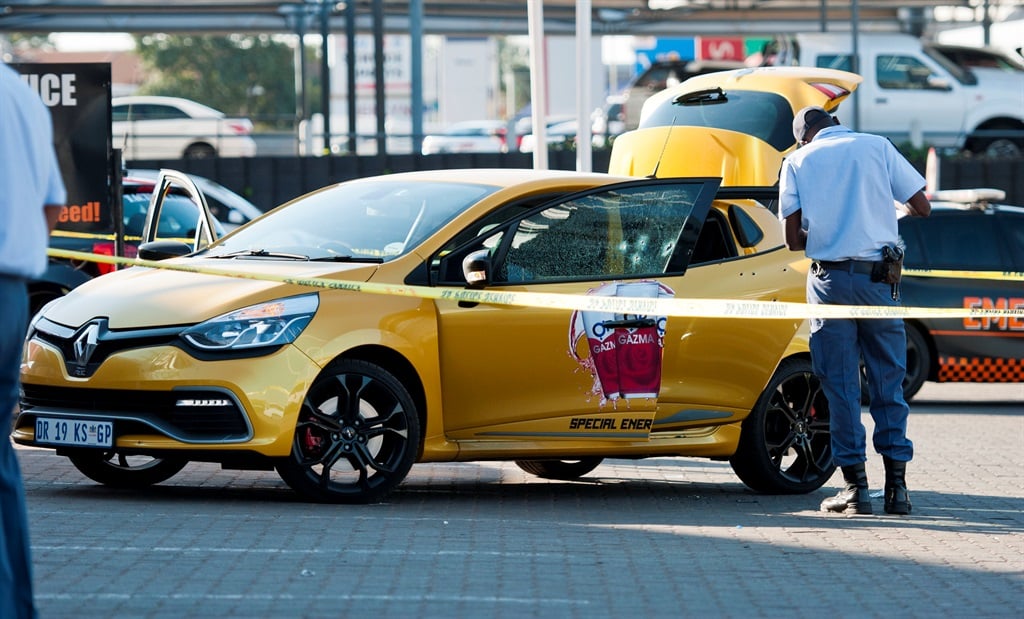 Police at the crime scene where Wandile Bozwana was gunned down in Pretoria on 2 October 2015.
Gallo Images / Thapelo Maphakela

Wealthy businessman Wandile Bozwana met a violent end when he was gunned down in his car in Pretoria in October 2015. Sadly, Bozwana's death is not unique, and bears many of the hallmarks seen in other assassinations in South Africa.

That Bozwana had political connections also reflects a trend of political rivalries being settled through violence. His alleged killers are on trial only now, six years after his death, perhaps reflecting the corrosive impact that intimidation and violence has had on South Africa's criminal justice system.

Assassinations, politics, the taxi industry and big business are interlinked in South Africa. This nexus is epitomised by the case of Wandile Bozwana who was killed in October 2015 while he stopped at a traffic light in Pretoria. He was shot nine times and died a billionaire, having built his fortune acquiring government contracts.

Bozwana's death was one assassination among many. Our work at the Global Initiative Against Transnational Organised Crime (GI-TOC) monitoring assassination trends in South Africa has recorded 1 822 hits in the country between 2000 and 2020. In Gauteng, the province where Bozwana was killed, 200 assassinations have been recorded between 2015 and 2020.

Assassinations, or "hits" - by which we generally mean targeted killings which involve a hired hit man, carried out for economic, personal or political gain - have an extremely detrimental impact on South Africa's ongoing democratic project and often-fragile institutions, creating fear, uncertainty and instability.

The taxi industry and its role in South Africa's assassinations

Vusi "Khekhe" Mathibela, the person accused of arranging the hit men who killed Bozwana, is currently on trial. Mathibela has built a formidable empire for himself in the taxi industry. He is from Mamelodi in Pretoria.

He was arrested after one of his co-accused identified him on CCTV and pointed out Bozwana, who was shopping at the luxurious Sandton City in Johannesburg with his partner on the day he was killed. In statements from his co-accused, Mathibela is said to have organised and paid for the hit. However, the statements have since been withdrawn by the co-accused, who said they were obtained under duress. Controversial businessman and taxi boss Vusi Mathibela during his appearance for bail hearing in Pretoria.

Police at the crime scene where Wandile Bozwana was gunned down in Pretoria on 2 October 2015.
Gallo Images Gallo Images / Thapelo Maphakela

The taxi industry is a big part of South African culture, but has also long been linked to violence. It started as a grey market that provided transport and economic opportunities to black South Africans during the apartheid regime.

The industry remains the core means of transport for the country's workforce. It is estimated that this part of the transport industry has 200 000 minibus taxis, generates R90 billion in revenue annually, and provides employment to hundreds of thousands of people.

However, the industry has long been notorious for its violence and lack of control by formal regulation. Assassinations in the taxi industry can be linked to competition for taxi routes or leadership battles within associations. It also provides a recruitment pool from which hit men can be hired for assassinations outside the taxi industry.

In the GI-TOC's data gathering on assassinations in South Africa, the taxi industry merited its own category because of the sheer prevalence of assassinations in this business. Of the hits recorded between 2015 and 2020, 51% were connected to the industry.

In practise, Mathibela ran the Mamelodi Amalgamated Taxi Association (MATA). He rose to power because his uncle was in the industry and, as his own members have testified via affidavit, he was extorting money from taxi drivers and inciting violence against those who did not comply. The association was put under administration as a consequence of the violence and his influence has since diminished.

The current administrator of MATA, Hettie Groenewald, has been involved in the taxi industry for decades and describes in a practical way how to manage this volatile industry said:

"Keep your members happy. Let them feel they are part of an association. So when they think violence will erupt, then they will come to me."

This prevents splinter groups from forming. "No one assists these people," she said, which includes the local (Mamelodi) police. "We try to prevent violence before it gets out of hand."

Bozwana was a businessman with prominent political connections. One of the most compelling set pieces of the Bozwana story is a boxing match between Floyd Mayweather and Manny Pacquiao in Las Vegas in May 2015 (before Bozwana's assassination).

This fight was billed as "the battle for greatness". Bozwana allegedly lent prominent politician Fikile Mbalula a large sum of money in order to attend. Mbalula strongly denied this after it had been reported by several newspapers. If the allegation were true, it would point to how intertwined Bozwana was with key figures in the ANC.

A more curious matter is a meeting between Bozwana, Mbalula and Mathibela at Emperor's Palace, a casino complex not far from OR Tambo International Airport - just two days before the assassination. The soon-to-be-murdered Bozwana, the then-minister of police, and the man who would eventually be arrested for organising Bozwana's assassination all together at a casino. Mbalula spoke at Bozwana's funeral, saying:

"He was a generous man. He was one person I would abuse financially. And sometimes for political reasons."

He has admitted to being friends with Bozwana, and with his alleged assassin.

Bozwana also saw another high-ranking politician, Supra Mahumapelo (and a long-standing member of the ANC), as an adversary.

Mahumapelo was the premier of the North West before being ousted amid violent protests against him in 2018. He has repeatedly been accused of being the man who ordered the hit against Bozwana.

Mahumapelo has vehemently and repeatedly denied these accusations. Themba Gwabeni, one of his most vocal opponents, has stated Bozwana was killed because he opposed the North West government, and Mahumapelo in particular, for being involved in business while serving as a politician.

What makes Gwabeni's accusation of Mahumapelo's ordering the murder more compelling is that it was echoed by one of the hit men - a gang member - upon his arrest. The man turned state witness and filed an affidavit with the Gauteng police's Provincial Investigations Unit in which he claimed Mahumapelo ordered the hit on Bozwana. Mahumapelo has repeatedly denied this in the media. Politically connected hits are a major phenomenon in South Africa.

The GI-TOC's analysis of reported assassinations covers four major categories: the taxi industry; organised crime; political; and personal. A total of 338 political hits were recorded between 2015 and 2020, reaching a peak in 2019. Hits related to politics and organised crime often overlap as disputes emerge over government tender allocations. Political and organized crime hits in Gauteng, where Bozwana was killed, saw an increase from 2016 to 2018, and then declined again in 2019 and 2020.

The history of the ANC is rife with political killings as different factions have been known to turn to violence to settle disputes. These have been particularly concentrated in KwaZulu-Natal, where rates of political assassinations dwarf those elsewhere in the country. Between 2015 and 2020, 103 assassinations were recorded here, more than five times what has been recorded in any other province in South Africa.

The GI-TOC's analysis shows assassinations in KwaZulu-Natal tend to peak around election times or in key municipalities where community protests are prominent or where local councils are in financial straits.

The circumstances of the killings suggest some may be interfactional battles for control of local government positions, which present opportunities for unscrupulous officials to enrich themselves by controlling lucrative government contracts.

During the 2016 local government elections, at least 60 people were assassinated across the province. In other cases, protest leaders are systematically targeted to silence their (usually justified) demands for improved service delivery and an end to corruption.

Assassinations seem to occur where political and business interests clash. The mining industry in KwaZulu-Natal has seen increased opposition to its operations by neighbouring communities. It seems this conflict has evolved into deadly violence, making mining the new frontier of assassinations in the province: there have been at least 38 assassinations and 14 attempted ones in mining localities since 2016. Activists and residents opposing mining interests as well as local political officials have been targeted. In October this year, it will be six years since Bozwana's murder. His alleged assassins are still on trial and there is no sign the political actors in the case will be held accountable.

South Africa's criminal justice system has not been immune to the scourge, with a number of cases involving the assassination of magistrates, judges, attorneys or witnesses in trials. Since 2016, there have been at least six assassinations or attempted assassinations of criminal lawyers in South Africa. In the most recent example, three gang members were jailed in April 2021 for an attempted hit on William Booth, a prominent Cape Town lawyer who has represented high-profile criminal figures.

The violence and threats of violence in this sphere create a pervasive climate of fear, which may have far-reaching consequences. Judges, lawyers and magistrates may feel compelled to compromise their professional integrity, for example, by influencing other members of the criminal justice system. Witnesses may also be intimidated and so retract crucial evidence.

Assassinations have similar impacts across all sectors of society. This form of murder is used to manipulate and exert power over politics, business, the criminal justice system and personal relationships. The case of Bozwana, a prominent politically connected businessman, shows this in action.

Too Many Enemies - a brand new podcast series - explores the assassination of a billionaire. Brought to you by The Global Initiative against Transnational Organised Crime in partnership with News24 and produced by Volume.

Over six episodes, Too Many Enemies will look at what the assassination of Wandile Bozwana means for the state of politics, crime and justice in South Africa today. It's a story involving top politicians, taxi bosses, assassins and flamingos.

We live in a world where facts and fiction get blurred
In times of uncertainty you need journalism you can trust. For only R75 per month, you have access to a world of in-depth analyses, investigative journalism, top opinions and a range of features. Journalism strengthens democracy. Invest in the future today.
Subscribe to News24
Next on News24
PODCAST | The Story: Public Protector Busisiwe Mkhwebane's fate hangs in the balance