A four-metre long yellow anaconda, a boa species endemic to southern South America, was confiscated from a house in Van Wyk Park, Boksburg on Wednesday, along with 20 rabbits.

The SPCA received an anonymous tipoff to inspect the living conditions of the animals at the residence, said senior inspector Vicky Finnemore.

"We first issued a warning for the living conditions to be improved on and at first the owner did comply. After a follow up inspection it was revealed that he had let things slide back into the state of neglect the snake was originally found in," she said.

The team then had to get a seizure warrant to rescue the snake that was being kept as an exotic pet, and the rabbits that were being bred to feed the anaconda.

"The rabbits were being bred for the purpose of feeding the snake and it's illegal to feed live prey to a captive predator," said Finnemore. A yellow anaconda rescued by the SPCA. The anaconda was living in a small tank at a residence in Van Wyk Park, Boksburg.

This yellow anaconda was rescued by the SPCA. It's not yet clear what will happen to the animal. 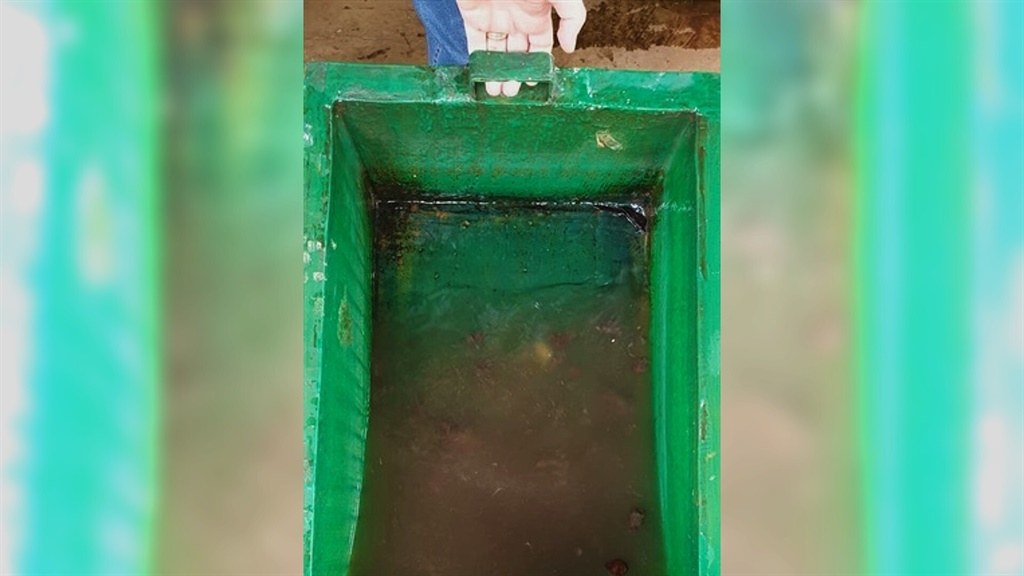 The dirty water in the tank of a yellow anaconda that was being kept as an exotic pet. (Supplied)

She said the snake's tank was filthy and not an adequate size for an animal of that length, nor is it able to express natural behaviour in such a confined space.

"When we opened the tank the smell was nauseating. The drinking water was a thick, dirty sludge. The snake weighs 24 kilograms and in all the time it's lived in that tank, it hasn't been able to stretch out to its full length which is cruel," she said.

According to Finnemore, thousands of people unfortunately have pet snakes in tanks.

"People buy them from pet shops and they aren't sufficiently educated on how to properly care for them. They get tired of cleaning the tanks and they don't have the right lighting and heating which can cause the animal to suffer all sorts of illnesses," she said.

According to the inspector, people don't need permits to keep exotic animals as pets, which she believes can be problematic.

"South America exports these reptiles to other countries in the thousands in these small containers, a lot of which don't even make the journey," she said.

A snake expert came to look at the anaconda and identified it as most likely a female, but he couldn't tell how old she was. But Finnemore said she is fully grown.

"There are rehabilitation centres for indigenous animals but not exotic animals and we can't just release the snake into the wild because it's not its natural habitat," said Finnemore.

The risk is that the anaconda will disrupt the local ecosystem or mate with other species of snake she said.

The SPCA has not yet decided what they are going to do with the snake.

We live in a world where facts and fiction get blurred
In times of uncertainty you need journalism you can trust. For 14 free days, you can have access to a world of in-depth analyses, investigative journalism, top opinions and a range of features. Journalism strengthens democracy. Invest in the future today. Thereafter you will be billed R75 per month. You can cancel anytime and if you cancel within 14 days you won't be billed.
Subscribe to News24
Related Links
WATCH | 'Too close for comfort': Black mamba found hiding in the roof at a Durban home
Where the streets have no names: Sewage, snakes and housing troubles grow in Soweto's Snake Park
WATCH | Hungry mamba gets caught in a cage with panicking parakeet
Next on News24
WATCH | Two security guards injured during botched CIT heist in Sebokeng