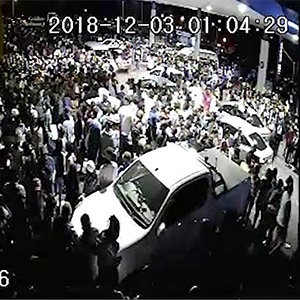 Scores of people wait at a Sasol garage near the FNB stadium which hosted the Global Citizen festival on Sunday.

What was supposed to be an exciting day filled with international entertainment, turned out to be a horrific ordeal for concert-goers outside the FNB Stadium in Johannesburg on Sunday evening and in the early hours of Monday.

CCTV footage has emerged of the chaos that ensued when gangs of thugs attacked revellers leaving the Global Citizen Festival: Mandela 100.

"It was so chaotic," said Cydwell Masango who was working a late shift as a pump attendant at the Sasol garage in Ormonde, where the attacks took place.

"Just after 22:30 I saw a Toyota Quantum pull up filled with young guys who were dropped off, and later walked to the stadium as if they were attending the event. About 30 minutes after that, I just heard screaming."

Masango told News24 that he could hear countless people screaming about their cellphones and other personal belongings that were taken from them.

"It was so full of people that we could not see the culprits. Some guys were walking around with knives and screwdrivers, threatening people," he said.

According to Masango, who has been working at the Sasol petrol station for eight years, it generally gets full after soccer matches or events hosted at the stadium. However, he said he had never come across scenes as chaotic as on Sunday evening.

"People were hurt. There was a woman who was bleeding from a cut on her nose after being mugged. Our first aid assisted her, as there were no police around," he said.

Masango said that they called the police to assist, but law enforcement only showed up hours after the ordeal.

Global Citizen and the House of Mandela said on Monday that they were "deeply disturbed" by the reports of criminal attacks on concert-goers.

"The safety of our guests is always of paramount importance to us and we understand and strongly empathise with their hurt and anger," Andrew Kirk, global director of PR for Global Citizen, said in a statement.

Police Minister Bheki Cele described the concert as "well polished" and said he had received a full briefing the morning of the concert.

"If anybody says something happened after that... they must have a case number, and then the investigation will start," he said in an interview with eNCA on Monday morning. Cele said police had one case number for a stolen cellphone, but said that no other cases had been opened.

We live in a world where facts and fiction get blurred
In times of uncertainty you need journalism you can trust. For only R75 per month, you have access to a world of in-depth analyses, investigative journalism, top opinions and a range of features. Journalism strengthens democracy. Invest in the future today.
Subscribe to News24
Related Links
WATCH: Gang of men mug woman in Tshwane CBD
WATCH: Violent mugging outside Johannesburg High Court caught on CCTV
Donate blood on Mandela Day
Next on News24
WATCH | Joburg woman fights off would-be cellphone thief