A stretch of road, leading to a popular holiday resort in Limpopo, is in a state of disrepair.

A part of the road's surface has cracked and what appears to be a sinkhole has started to form.

Residents believe it's an accident waiting to happen.

The P43/3 (Eiland Road) runs between Letsitele and the ATKV Eiland Spa. It's a 40km stretch of road and the sinkhole is situated roughly 5km from the resort.

Joe Dreyer, editor of the Far North Bulletin, told News24 he suspected a lack of maintenance and heavy rain were to blame.

"Maintenance, including clearing the bushes and the undergrowth next to the sides of the road, and cleaning culverts that run beneath the road, wasn't done," he said. The area experienced heavy rainfall in recent weeks after Cyclone Eloise made landfall.

Dreyer said there was a water stream close to that section of the road, which flooded due to the "tremendous amount of rain".

"That water couldn't flow underneath the road through these culverts because they were blocked up - the water, as water does, took the easiest route to flow," he explained.

"What it did, was it chowed all the soil, earth, beneath the road."

There is a visible dip in the road. 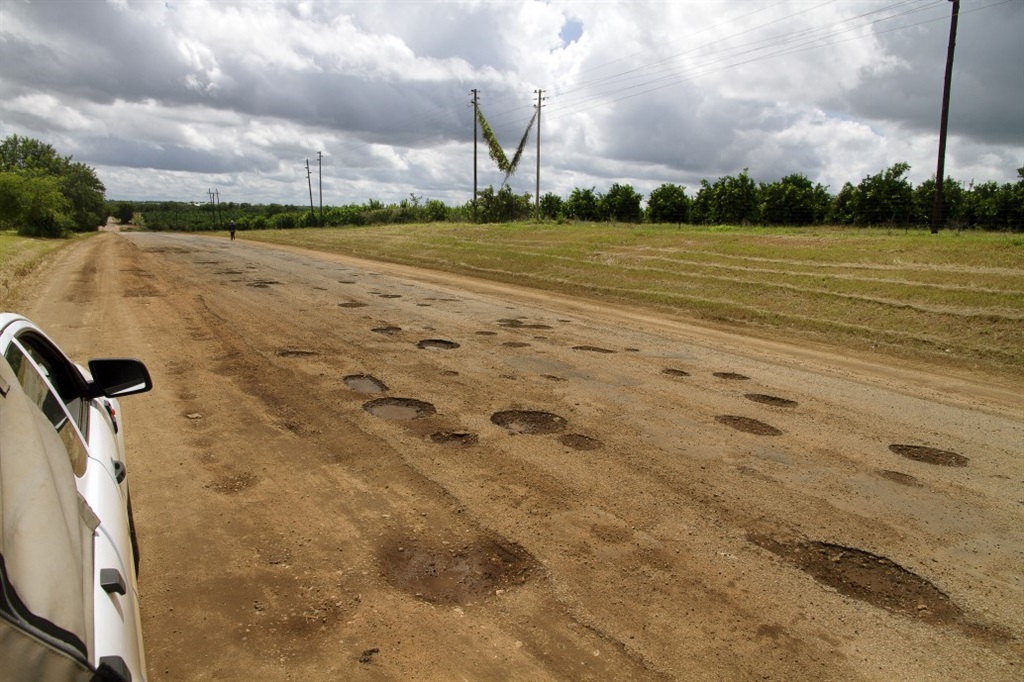 Bennie Steenkamp, ATKV Eiland Spa resort manager told News24 that they had painted a yellow rectangular block on the sunken section of road to warn motorists.

"There is a 7km stretch that is really in a horrific state. So, for that, we send an sms every day, to each and every arrival, and we ask them to use the Giyani Road," he said.

But the forming sinkhole isn't the only issue on Eiland Road. It also contains more than 1 000 potholes, by Dreyer's count.

Agri Letaba chairperson Pieter Vorster said the road runs past some of the biggest producers of citrus in the southern hemisphere.

"That is the main route in and out. Every day, there are people travelling up and down. That's not even the trucks that have to load the produce, the citrus, onto trucks. With the rain, the trucks make the road even worse," Vorster told News24.

He said the traffic on the road increases during harvest season.

It's a death trap waiting to happen.

"It's just a matter of time before something happens, which will be very sad. We've been in contact with the local municipality and there is just nothing happening."

Road crews in the area are busy fixing the surface, but Vorster said they are working at "a snail's pace". The Department of Public Works, Roads and Infrastructure, and the Roads Agency Limpopo, are responsible for the repair and maintenance of the P43/3.

"It's just that the damage has become overwhelming over time. We are looking at better options, that include major rehabilitation, possibly in the new financial year, starting this April 2021," he said.

"For now, we are applying routine maintenance, which includes pothole patching, but, as I said, we are looking at various options."

We live in a world where facts and fiction get blurred
In times of uncertainty you need journalism you can trust. For only R75 per month, you have access to a world of in-depth analyses, investigative journalism, top opinions and a range of features. Journalism strengthens democracy. Invest in the future today.
Subscribe to News24
Next on News24
WATCH | SARS shreds thousands of cartons of illegal cigarettes worth R18m

Every day ke payday for Daily Lotto players
Full list of lottery results
Lockdown For
DAYS
HRS
MINS
Voting Booth
Would you choose to continue working from home after the coronavirus lockdown if given the option?
Please select an option Oops! Something went wrong, please try again later.
Yes, it's much better for me
40% - 6633 votes
No ways! I can't wait to get back to the office
12% - 1950 votes
A mixture of both would suit me best
48% - 7972 votes
Previous Results
Podcasts
PODCAST | MISSING MATTHEW EPISODE 3: Decades of false starts add to a family's despair