The Boksburg SPCA on Tuesday honoured Jessie, a Johannesburg dog, for her bravery and compassion.

Jessie spent more than half an hour trying to get Chucky to safety. 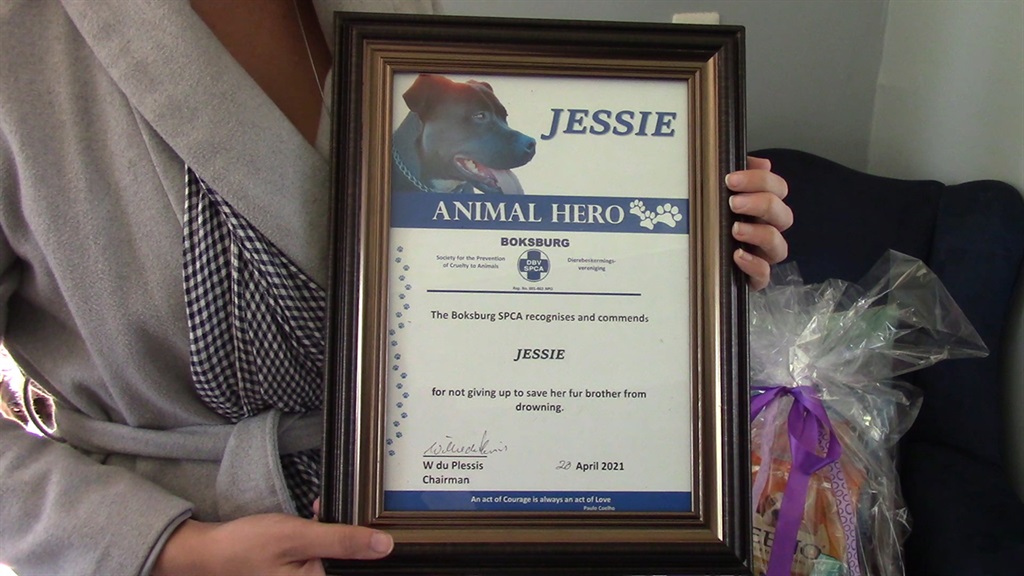 "It was amazing to be at the ceremony, and we were so super-proud and honoured. Jessie was very excited, curious and sniffed around. She could hear all the other dogs and just wanted to go play," Jessie's owner, Byron Thanarayen, told News24.

At the ceremony, the heroic dog was given a certificate and a gift basket, filled with treats and toys.

Thanarayen and his wife, Melissa, have also been approached by Aqua-net, a company that sells and installs swimming pool nets and covers.

Aqua-net is donating a pool cover to the Thanarayen family.

"They wanted to make sure that this would not happen again. We are so, so grateful for this. Aqua-net said they would be installing it next week," he said.

Last week, the Thanarayen family set up a website to raise funds for the Boksburg SPCA.

They are creating merchandise that features Jessie and Chucky – money made from this endeavour will also go to the SPCA.

Here are the Daily Lotto numbers
Full list of lottery results
Voting Booth
Have you and your family been counted in Census 2022?
Please select an option Oops! Something went wrong, please try again later.
Yes
48% - 1241 votes
No
52% - 1371 votes
Previous Results
Podcasts
PODCAST | The Story: How one incident at Stellenbosch University sheds light on deeper issues