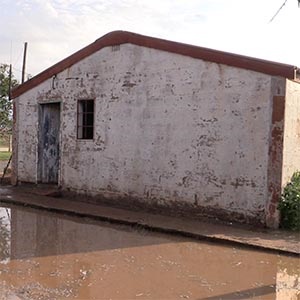 The house that the late Winnie Madikizela-Mandela lived in when she was banished to the Free State town of Brandfort in 1977 was meant to have been converted into a museum.

However, almost 10 years after the Department of Arts and Culture allocated funds to the project, there is still no progress.

Mildred Francis Monyana, Zindzi Mandela's childhood friend and a frequent visitor to the home, says she is disappointed that the property has not been preserved.

"I am saddened to see this house this way, because last time I remember, this house was such a beautiful house," she says.

Monyana remembers the house as having lush green grass and colourful flower beds. Today, the main house has broken windows and floors strewn with litter.

Former Free State premier, now ANC secretary general, Ace Magashule, denied any wrongdoing when he spoke to journalists last week. He reaffirmed that the museum would be built.

"I’m not personally ashamed because we have been in contact since 2007. The family knows there’s no government money that’s been lost.

"We’re pleading with the media to give Winnie a decent send-off, celebrate her life in a proper way [and] focus on what Winnie has done for the country, black and white," he added.