A warehouse storing non-perishable food burned down at Gosforth Park in Germiston, south of Johannesburg on Thursday.

"When we arrived, flames were protruding through the roof because of the food contents such as powdered milk, coffee, tinned food and other non-perishables inside the warehouse that were alight,” EMS spokesperson William Ntladi told News24.

Ntaldi said his team received a call at 08:00 and they dispatched eight fire engines to the warehouse – the flames only died down at 15:00.

“The roof caved [in], but we managed to save part of the roof. However, they would have to rebuild the entire structure. Most of the metal structures gave up," Ntladi said.

It took 38 firefighters from four surrounding fire stations to fight the flames and stop them from spreading to other parts of the neighbourhood.

The cause of the fire is still under investigation.

Ntladi said the warehouse occupants suspect faulty electrical wiring was the cause of the fire.

There are were no deaths or injuries.

On Friday, 25 firefighters from two fire stations were dispatched to monitor the warehouse, as well as to cool off any potential areas that may ignite a fresh fire.

We live in a world where facts and fiction get blurred
In times of uncertainty you need journalism you can trust. For only R75 per month, you have access to a world of in-depth analyses, investigative journalism, top opinions and a range of features. Journalism strengthens democracy. Invest in the future today.
Subscribe to News24
Related Links
WATCH | 'Police get pushed every day,' says Malema as assault trial is postponed
WATCH | Top cop Bonang Mgwenya granted R20 000 bail in corruption, tender fraud case
WATCH | More woes for Edwin Sodi as AFU seizes luxury cars, including Ferrari and Bentley
Next on News24
WATCH | Snake catcher rescues metre-long puff adder at Durban steel factory 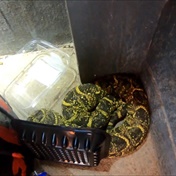 3 players win R109k in the Daily Lotto prize
Full list of lottery results
Lockdown For
DAYS
HRS
MINS
Voting Booth
Who do you think is going to win the 2020 US election?
Please select an option Oops! Something went wrong, please try again later.
Biden is going to take it
46% - 7350 votes
It's four more years for Trump
54% - 8468 votes
Previous Results
Podcasts
PODCAST | POLITICS UNMUTED: Money for nothing, but how do we correct the corruption ship?