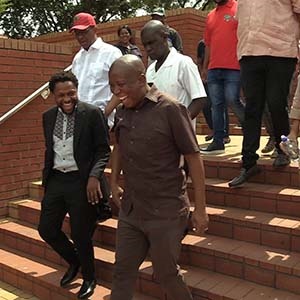 EFF leader Julius Malema claimed on Wednesday that if he had assaulted a police officer who has laid a common assault charge against him, he would have "panelbeated" him.
Screenshot

EFF leader Julius Malema claimed that if he had assaulted the police officer who accused him of common assault, he would have "panelbeated" him.

The officer in question alleges that Malema and EFF spokesperson Mbuyiseni Ndlozi assaulted him last year at the funeral of struggle icon Winnie Madikizela-Mandela.

Malema and Ndlozi appeared in the Randburg Magistrate's Court on Wednesday morning in connection with the allegations.

Magistrate Liesl Davis postponed the case to March 10, 2020 to give the accused and National Prosecuting Authority time to hold consultations, and make representations and disclosures before the trial starts.

We live in a world where facts and fiction get blurred
In times of uncertainty you need journalism you can trust. For 14 free days, you can have access to a world of in-depth analyses, investigative journalism, top opinions and a range of features. Journalism strengthens democracy. Invest in the future today. Thereafter you will be billed R75 per month. You can cancel anytime and if you cancel within 14 days you won't be billed.
Subscribe to News24
Related Links
WATCH: 'Where there is a need to use violence to stop violence we'll do it' - Malema
Next on News24
WATCH | John Steenhuisen delivers DA's take on 'State of the Nation' address