WATCH: 'Our land is being controlled by white foreigners' - Gugulethu backyarder 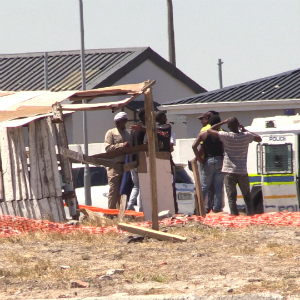 Gugulethu 'backyarders' have distanced themselves from protest violence that erupted near the famous Mzoli's tavern on Sunday, but say they have been waiting for land for long enough, and call on City authorities to start delivering on their promise of housing. Watch.

Four people have since been arrested for public violence after a land invasion attempt. Main roads leading through the area were strewn with bricks and traffic lights were vandalised as locals demanded land for adequate housing.

On Monday morning, the N2 was temporarily closed owing to the protest action.

On Sunday, a supermarket was looted and car was set alight.

"Meanwhile tyres are still burning on the road. The protest that left several businesses and vehicles torched started [on Sunday] in NY108," he said.

We live in a world where facts and fiction get blurred
In times of uncertainty you need journalism you can trust. For only R75 per month, you have access to a world of in-depth analyses, investigative journalism, top opinions and a range of features. Journalism strengthens democracy. Invest in the future today.
Subscribe to News24
Related Links
They're treating us like animals - Steenvilla evictee
WATCH: 'Runner-phosa' promotes healthy living with morning walks
WATCH: Zille intervenes after threats to burn down Gugulethu school
Next on News24
PODCAST | Ballot Box: Why Facebook is not doing enough against election misinformation

Lucky Sunday for 3 Daily Lotto players
Full list of lottery results
Lockdown For
DAYS
HRS
MINS
Voting Booth
Facebook is facing a fresh crisis after a former employee turned whistle-blower leaked internal company research. Do you still use Facebook?
Please select an option Oops! Something went wrong, please try again later.
Yes, the benefits outweigh the risk for me
32% - 2545 votes
No, I have deleted it
38% - 3017 votes
Yes, but I am considering deleting it
31% - 2454 votes
Previous Results
Podcasts
PODCAST | Ballot Box: Why Facebook is not doing enough against election misinformation