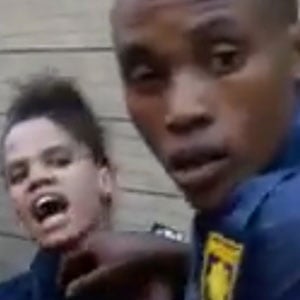 "I can't wait until everybody has gone home so it's just me and you left here, so I can fuck you up good."

These were the words a police officer allegedly told Prudence Hansen after she was arrested at Canal Walk in Cape Town more than a month ago.

A video of her arrest was widely circulated on social media last week, on March 20.

The incident happened on February 5 when Hansen and a colleague, Russel Dirks, were smoking in a stairwell at the mall where they worked. Two male police officers and two civilians - one in handcuffs - approached them.

Hansen said one of the officers shouted: "Move there, move!"

"They had to walk past us, down the stairs to get to their van. As the officer passed, I told him that we don't mind moving, but there is a nicer way to ask people," Hansen said.

She said the officer asked her: "What do you mean there is a better way to ask?"

The officer apparently turned around, threw his hands up in the air and told Hansen to "just go".

"At this point my blood was boiling. I'm not defending my behaviour, but I was pissed off and told him: 'Nou vat jy my vir 'n gat. Voetsek!'"

According to her, the officer "blew his top", grabbed her by the wrists and pulled her down the stairs.

She fell at the bottom of the stairwell and was dragged along the brick floor, she said.

After pleading with the officer to let her go, she punched him.

"He then opened the door to the police vehicle and wanted to chuck me on the seat. That's when my head hit the van."

Once she was in the van, she started kicking the officer.

"I'm not going to lie, I was aiming for the man's balls [genitals]."

The officer called for backup.

The 27-year-old tried to free her wrist from his grip, but then the police officer pulled her by her hoodie, she alleged.

She claimed she was also choked.

"At that moment I remembered that I wasn't wearing a T-shirt underneath. I pleaded with him, don't do this. But he looked at me and said: 'I don't give a fuck.'"

That's when she asked her friend Dirks to film the incident. A small crowd had also gathered around them.

"He [the policeman] wasn't interested in having a civilised conversation. I feel that I bruised his ego as a man and, on top of it, he's a cop."

"After backup arrived, one officer also started dragging me and I took a swing at him," she said.

The officers picked her up, put her in the back of the van and took her to Milnerton police station where she spent the night. She was charged with assault.

Hansen was supposed to appear in court on February 7, but the case was kicked out.

She said that the officer claimed in his statement that her boyfriend had stolen from one of the stores and that she had interfered with their investigation.

She opened a case against the officer at the Kraaifontein police station on February 7.

Hansen said she suffers from anxiety and that she has left her job since then.

However, she did not want the police officer to lose his job, she said.

"I feel like crying even now. I freeze when I see a policeman, an emotional Hansen told News24.

"I want him to see that it's not okay to go around and treat people like shit."

"It's not okay to be rude. You need to have respect and common decency for others. You need to be a human being first, then a cop," she said.

We live in a world where facts and fiction get blurred
In times of uncertainty you need journalism you can trust. For only R75 per month, you have access to a world of in-depth analyses, investigative journalism, top opinions and a range of features. Journalism strengthens democracy. Invest in the future today.
Subscribe to News24
Related Links
Family thanks motorists who prevented culprit from fleeing accident scene
WATCH: Cape Town man 'manhandled' by traffic officials; investigation into incident launched
Next on News24
WATCH | Umalusi gives matric results the all-clear despite probe into early access to exam papers