A group of nurses, community healthcare workers and members of civil organisations this week staged a call to action outside the head offices of South Africa's private healthcare groups.

The group also asked that shareholder payouts be suspended until the year 2022.

Instead, the coalition behind the campaign said the shareholder money should be put towards the improvement of working conditions for healthcare workers, who are facing PPE shortages and poor access to healthcare as they cannot afford medical aid.

In this time of crisis, we must prioritise the health and well-being of all South Africans, not just those who are wealthy.

The #Care4Carers campaigners said the private sector could afford to stall shareholder payouts in order to contribute to the fight against Covid-19 infections among healthcare workers.

The call comes after more than 200 healthcare workers lost their lives to Covid-19.

And, while the coalition acknowledges the responsibility to provide adequate PPE and testing lies with the national government, they have charged the private sector with neglecting their country duty during a time of crisis.

"Healthcare workers have sacrificed a lot during this pandemic," said Ngqabutho Mpofu, adding that the private sector needs to make sacrifices too. 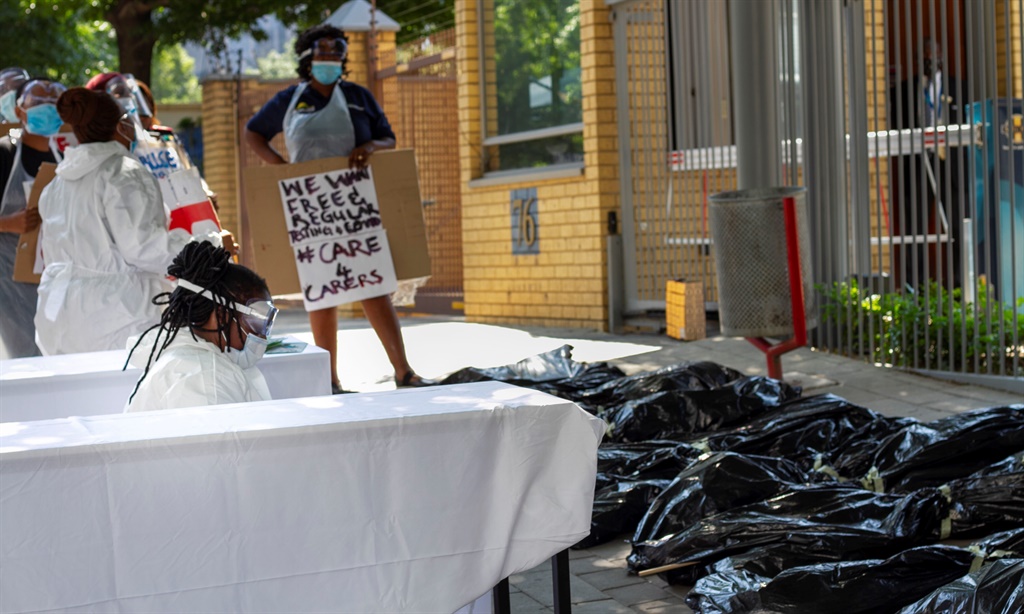 A healthcare worker kneels before stuffed body bags outside the Netcare head office in Sandton on 22 October. The #Care4Carers campaigners said the bag symbolise the colleagues they lost during the Covid-19 pandemic.
Supplied Sumeya Gasa

The #Care4Carers campaigners set up stretcher beds and stuffed body bags outside the Netcare head offices to symbolise the colleagues who lost their lives during the pandemic.

They said their decision to stage a call to action came after they sent a letter to private healthcare groups on 9 September.

"Key to achieving this goal is to ensure that healthcare workers are fairly treated in recognition of their human rights and to enable them to provide a better healthcare for all," the letter reads.

After acknowledging receipt of the letter, the group did not receive a response to their call. This prompted their decision to hand-deliver a memorandum.

It cannot go unnoticed, the loss of lives that we have of healthcare workers, who came to uphold their oath in saving lives.

"We are calling on the private sector to be a team player and to join fellow South Africans in putting life before profit," said Baloyi.

Dr Nceba Ndzwayiba, group human resources and transformation director at Netcare, met the group to receive the memorandum and committed to engage with the campaigners.

Ndzwayiba said he was unable to comment on the demands made by the #Care4Carers campaigners, but assured them that their memorandum will be considered, and that they could expect proper engagement on its content.

We live in a world where facts and fiction get blurred
In times of uncertainty you need journalism you can trust. For only R75 per month, you have access to a world of in-depth analyses, investigative journalism, top opinions and a range of features. Journalism strengthens democracy. Invest in the future today.
Subscribe to News24
Related Links
WATCH | 'We are losing colleagues': Tygerberg nurses protest for better working conditions
WATCH | Life in a Cape Town Covid-19 hotspot – food, fear and work in Tygerberg district
WATCH | Tygerberg Hospital staff protest over PPE, transport on International Nurses Day
Next on News24
WATCH | Covid-19 fatigue may cause a second wave in Africa, expert warns