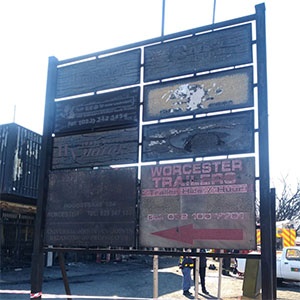 A gas tanker exploded in Worcester in the Western Cape in the early hours of Wednesday morning. (News24)

Worcester residents in the Western Cape are picking up the pieces after a gas tanker exploded in the early hours of Wednesday morning.

Several buildings were destroyed when a truck carrying gas exploded in the small town.

Western Cape police chief Kenny Africa told News24 that a biltong shop, bicycle shop and the Department of Water and Sanitation building were among the premises destroyed in the blaze.

Africa said the explosion was so loud that people living in towns surrounding Worcester felt its impact.

"People thought it was an earthquake."

It was initially thought that a petrol tanker exploded but it has since been confirmed that the truck carried gas.

Africa said medical rescue personnel were on the scene within minutes.

Although there were no fatalities, roads leading to where the incident took place were blocked off.

We live in a world where facts and fiction get blurred
In times of uncertainty you need journalism you can trust. For only R75 per month, you have access to a world of in-depth analyses, investigative journalism, top opinions and a range of features. Journalism strengthens democracy. Invest in the future today.
Subscribe to News24
Related Links
WATCH: Gas tanker explodes in Worcester, buildings on fire
WATCH: MyCiTi worker who put out car fire awarded for helping numerous customers
PICS: Man rushed to hospital after Worcester gas explosion 'obliterates' his car
Next on News24
WATCH | Eskom CEO Andre de Ruyter delivers keynote address at Sanef fundraiser